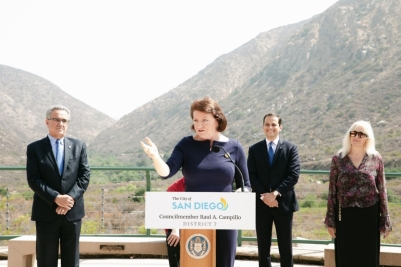 Calls to construct the bridge in Mission Trails Regional Park arose after the tragic drowning of Max Lenail, a 21-year-old hiker who died at the treacherous crossing.

The project was unanimously approved in May by the MTRP task force led by San Diego City Councilman Raul Campillo and the MTRP Citizen’s Advisory Committee.

Senator Atkins was joined by Max’s parents, Ben Lenail and Lori Yoder, along with MTRP representatives to make the announcement.

Building the bridge is consistent with the 2019 MTRP Master Plan Update as a priority project.

The family established a fund at the San Diego Foundation and have raised more than $750,000. Additionally, the Mission Trails Regional Park Foundation has created a restricted fund to support the bridge project, and tax-deductible donations can be made through the MTRP Foundation’s online giving webpage, by phone, or mail. Donations may be mailed to MTRP Foundation, 1 Father Junipero Serra Trail, San Diego, CA, 92119. Be sure to note that the donation is in support of the bridge project.