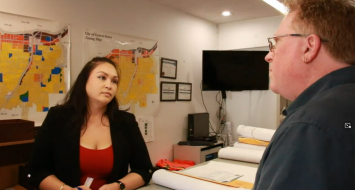 March 28, 2022 (Lemon Grove) – Attorney Cory Briggs has filed a lawsuit on behalf of the nonprofit Project for Open Government against the city of Lemon Grove. The suit alleges that the city acted illegally in failing to respond to multiple public records requests related to the city’s proposed censure and discplinary actions toward Councilmember Liana LeBaron. The City also denied Briggs access to inspect public records when he came to city hall in person the day before the censure hearing, and has still failed to respond weeks later.

The suit seeks a court order requiring the city to full comply with the California Public Records Act, California Constitution, common law and other applicable laws by disclosing all records requested. Briggs also seeks injunctive relief to inspect and copy public records (or portions allowed by law), as well as attorney fees and legal expenses.

The records requests were sent to the city clerk, Audrey Malone, with copies to the mayor and councilmembers.

The city has accused LeBaron of disruptive actions and driving away staff members. It considered a censure motion that was ultimately tabled but could be revisited later.

Briggs initially sought records including any claims against the city pertaining to LeBaron, employment positions unfilled since Dec.1, 2020, any records documenting negative opinions about the city voiced by employees, tapes of public meetings, criticisms received by councilmembers regarding LeBaron outside of public meetings, and more.

The day before the censure motion was on the agenda, Briggs sought to inspect these public records and was refused access. ECM also sent a reporter with a separate request to examine public records, but ECM's public records request was also denied by City Clerk Audrey Malone.

Briggs subsequently sought various records related to the dispute between the city and LeBaron. He contends that city actions barring LeBaron from city hall, including locking her out of the conference room, should have been agendized and improperly barred her from a safe place to meet with constituents. He also notified the city of his intent to sue if the records were not provided, but the city still failed to provide any records.

ECM's similar, though not identical records request, sought documentation of the city’s serious allegations against LeBaron, particularly regarding treatment of staff. The city initially advised ECM's editor that it would need 10 days to locate records and redact any personal information, but failed to provide any responses even beyond the 10 days, even when a reminder email was sent advising that the city was in violation of state law by not disclosing the records.

The city of Lemon Grove's official motto is "Best climate on Earth." But it's clear that when it comes to disclosure of public records to the press and public, a lot more sunshine is needed.

Below is the records request sent by ECM to city manager Lydia Romero on March 7:

In light of the special council meeting tomorrow, we would like to provide our readers with some evidence documenting the city’s serious claims regarding Councilmember Liana LeBaron.

Pursuant to the Calif. Public Records Act, please have the following records available for inspection today at 11 a.m.  Our reporter, Elijah, and intern, Matt, will be there to review the following documents:

If any documents are deemed privileged such as due to privacy issues such as revealing an employee’s personal address, please provide redacted documents for our reporter and intern to review and photograph today, as mandated under the California Public Records Act.

If the documentation is very extensive, please start with a representative sampling of the most serious examples in each of the six categories listed above so that we may view them in a timely manner given tomorrow’s hearing.

We would also welcome an opportunity for Elijah to interview you or another city spokesperson on these matters during his visit their today. Our intern will be available to videotape the interview which can be posted on our site to fully inform readers of the city’s concerns.

Rest assured that our intent is to provide fair and accurate coverage. The allegations against Councilmember LeBaron are serious, and I’m sure you will agree that it’s important for the public to view any evidence to support the city’s basis for proposing to censure and potentially seek a restraining order against her.

Thank you for your prompt assistance in this matter.

View ECM’s prior coverage of this issue: