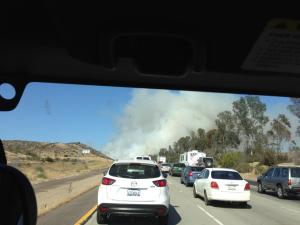 Update 8:00 p.m.  -- The fire has swelled to 60 acres, ECM news partner 10 News reports. One lane of 52 east is now open but the Santos ramp remains closed.  There are no threats to structures at this time.

June 16, 2013 (San Diego's East County) -- A fast-burning brush fire has consumed 20 acres and has now crossed into Mission Trails Regional Park, according to the CHP website at 5:25 p.m.  State Route 52 eastbound is also being shut down near Santo Road.

The fire started late this afternoon south of State Route 52 near Santo Road west of the park, IPN reported. It was burning in an easterly direction but has now shifted to burn toward the south, fueled by light winds, in light flashy fuels.  ECM reporter Nadin Abbott is en route to the scene.

Scanner traffic indicates evacuations have been requested on some trails in the park.  If you have information please post below in the comments section and email photos to editor@eastcountymagazine.org.

Sign up to receive free Viejas Wildfire & Emergency Alerts via e-mail at the top right side of our homepage and also receive a free weekly copy of East County Magazine. You can also follow ViejasAlerts on Twitter for brief text alerts on your mobile device. We recommend all of the above since you don't know what form of communication will work best in a major regional emergency.