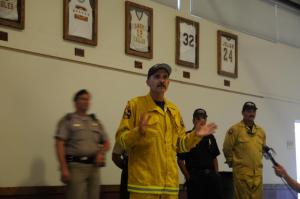 July 4, 2014 (Julian) The Fourth of July parade was an unintended victim  of the so called “Banner Fire” east of Julian, which destroyed two homes and injured a firefighter. The fire started at around noon and by this morning it has charred 217 acres, with 40 percent containment according to Captain Ken Bortisser of CAL FIRE.

The decision to cancel the parade, announced late yesterday by the California Highway Patrol and CAL FIRE, sparked consternation among some residents.

Julian Chief Rick Marinelli of the Julian Fire Department, as well as Chief Joe Rinaldi, the Incident Commander for CAL FIRE gave the reasons for the cancellation of the parade. Both men said that it had to do with the movement of equipment that had to continue to support operations for the Banner Grade. They also said that it was a decision based on public safety. In the worst case scenario, the fire would kick back to life, and doing the evacuations would be next to impossible with the Parade and the traffic jams. 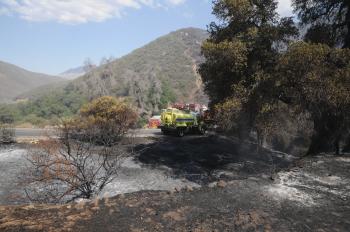 At a briefing held yesterday afternoon, Julian resident Frank Herndon demanded to know from Marinelli, “Whom did you speak with as a representative of the community?” He went on as to the economic cost to the community. Marinelli answered that Jack Shelver (Julian Planning Group) and Mike Menghini (Menghini winery owner and a community event organizer) were notified.

The back and forth in the meeting got testy at times, but Herndon reflected the feelings of the community. There is anger because this parade is the major summer event in the town.

In the Julian News Publisher site on Facebook, we find that the Community at Crest has offered a place in the parade for the people in Julian.

The Chamber also told the Julian Publisher that:

“From the Chamber of Commerce - Annual Julian 4th of July Parade Cancelled Due to the devastating fire that struck the Julian area today, numerous road closures and evacuations and under direction from the California Highway Patrol, the annual Julian Fourth of July Parade and celebration has been cancelled. The American Legion BBQ and Music in the Park will go on as planned.”

The Julian Post also wrote that they will walk starting at  the gas station to their post, where they will carry on the parade. 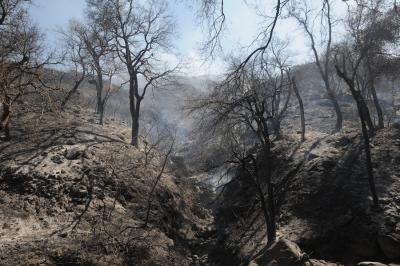 Earlier in the day about 200 homes were at risk and evacuations were ordered for the Whispering Pines Area and Kentwood. All evacuations have been lifted but road closures remained in effect late tonight.  Two homes were lost, as well as a shed.

Also while talking with Chief Marinelli at the Command post, he said that CAL FIRE did a very good job and it was an aggressive attack.

Captain Bortisser told us that units came from all over the County, as well as assets from Orange County. Most of the units on the ground were from the county, and they included Viejas Fire, Lakeside, El Cajon, Bonita, Coronado, Carlsbad and San Pascual. This list is far from complete.

There were also personnel at the Command Post from The County Office of Emergency Services.

The Red Cross and Julian CERT opened first a shelter at the Julian High School multi purpose room. According to Johhny Hake they were activated early in the incident, and then they were moved to the Park, and finally came back to the high school.

The number of evacuees was about 50, though Hake believes there were more. According to Sheriff Lt. J.W. Boltwertz while there were mandatory evacuations in place, they could not truly force anybody out of their homes. They were aware that some people chose to stay behind.

During the briefing when Herndon confronted Chief Marinelli was confronted, which was held at 6 p.m. at the Julian High School, we also learned that there had been a firefighter injury. While people were not pleased that the parade was cancelled, they still thanked fire and police officials with an ovation.

That said, issues were raised by citizens regarding notification. Some of the residents said that they did not get any reverse 911, or anything else. Officers went door to door, with bullhorns and the command center issued reverse 911 calls. Bortisser recommended people sign up for cell phone reverse 911 as well.

We recommend you have as many sources of notification as possible.  You can also sign up to receive free Viejas Wildfire & Emergency Alerts at the top right side of our homepage, and receive a free weekly copy of East County Magazine. You can also follow ViejasAlerts on Twitter for brief text alerts on your mobile phone.

You can thank the lawyers for this. Everyone is so afraid of being sued they wont do anything till the slightest hint of danger has passed. There was no active flame front on this fire at 6PM the day of the fire. A view from the Channel 8 news copter did not even show any smoke coming up. I would be real irritated if I lived in Julian.