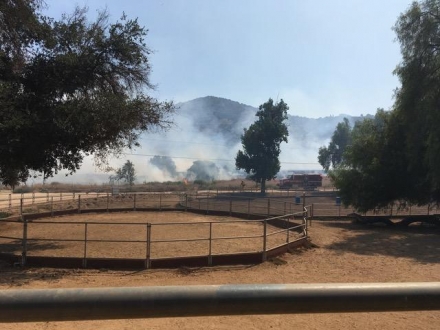 Editor’s note: Due to a problem with our email server yesterday we were unable to send East County Wildfire and Emergency Alerts on this fire. We have resolved the issue.
By Miriam Raftery
Photo by Robin Pawl
September 26, 2019 (Lakeside) – A brush fire scorched 52 acres yesterday afternoon, briefly threatening homes along Willow Road in Lakeside. Some residences were evacuated, though at least one homeowner stayed in her home with her horses and family, watching wind-whipped embers rekindle the blaze as firefighters battled to save homes.
The fire started off Willow Road east of Wildcat Canyon Rd. and Louis Stelzer County Park shortly before 12:30 p.m.  Flames leaped outside of the containment area, as Robin Pawl, owner of The Magic Horse in Lakeside, described in an e-mail to ECM after the fire burned close to her property in El Monte valley.
“ Fire trucks, planes and helicopters responded quickly and put the flames down.  Wind blew up a smoldering area and spread the new flames east up the valley,” Pawl says. “Crews had to come back and battle the blazes again.  Mostly tumbleweeds, grassed and other dry weeds burned rapidly, pushed by the wind.”
When a mandatory evacuation was ordered, Pawl faced a big decision. “I chose to stay with the horses, my mom and her dog, Maestro, and the parrots as the wind was taking the fire up the valley.  Embers were not blowing like they would be if trees and tall brush were burning.,” she says.
This is the second fire in the past two weeks to burn near her home.  An earlier blaze also started just east of the ranch when “five teenagers were driving recklessly and ran off the road,” she recalls.
Pawl praised firefighters for their efforts. “Much appreciation goes to all the fire teams for their efforts.  The precision flying of the pilots dropping retardant and water is amazing!”