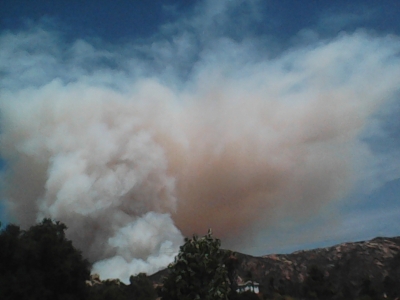 UPDATE AS OF 8:57 PM: ALL MANDATORY EVACUATION ORDERS HAVE BEEN LIFTED

July 11, 2017 (Lakeside) -- The fast-moving #JenningsFire has charred over 300 acres in the past hour and forced shutdown of I-8 in both directions from Lake Jennings Road to Dunbar Lane.

At least five structures remain threatened as of 3:30 p.m.. Mandatory evacuations have been ordered on Viewside, south of I-8,  Cal-Fire reports.

The fire, which began in brush at 1:40 p.m.,  is burning toward propane tanks at Kamps Propane, the San Diego Union-Tribune reports.  Airtankers and ground crews are battling the blaze. 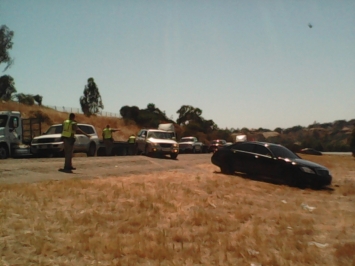 A firefighter has been injured and medics have been called to the scene.

The U.S. Forest Service has joined CAL FIRE and other agencies in battling this blaze.

Late this afternoon, traffic is backed up on Highway 67 to Mapleview Road in Lakeside and on I-8 to La Mesa.

State Route 94 was reported closed at 3:30 p.m. due to an accident in Dulzura.

Sign up to receive free East County Wildfire and Emergency Alerts at the top right side of our homepage and you can also receive a free weekly newsletter with East County news.  You can also follow EastCountyAlert on Twitter for alerts on your mobile phone. We recommend both in case one form of communication fails, as is the case today in Lakeside where some residents are without Internet service.