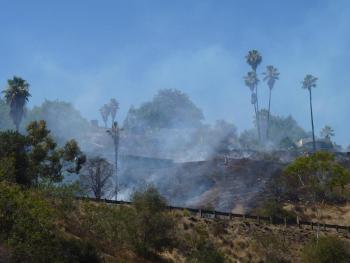 The blaze started when a vehicle fire spread into the brush along the shoulder of southbound 125 near Lemon Avenue.  Heartland Fire crews found a hillside had caught fire and was swiftly spreading toward homes, fueled by windy conditions.

“Palm trees were exploding into flames and area residents were evacuated,” said ECM editor Miriam Raftery, who was at the scene.  The evacuations were conducted by La Mesa Police and San Diego Sheriff’s officials.  As a helicopter circled overhead alerting residents via loudspeaker, homeowners had only moments to grab family photo sand important documents before leaving.

A second alarm was issued.   Eleven fire engines, a brush rig, two medic units and a Sheriff’s helicopter all battled the blaze.

California Highway Patrol shut down southbound 125 from I-8 to Spring Street as crews fought the fire from the freeway and on streets above the fire.  Some surface streets were also shut down, causing traffic congestion as fleeing residents joined motorists detoured off of 125.

The fire, which began at 2 p.m., was fully contained by approximately 3 p.m.

Fire officials credit defensible space around the homes with preventing any residences from being damaged.

Heartland Fire officials estimate that five acres were burned.  Several fire crews stayed on scene to mop up and watch for any hot spots.

One firefighter suffered a heat related injury and was transported to a local hospital, but is reportedly doing fine, according to Heartland Fire.