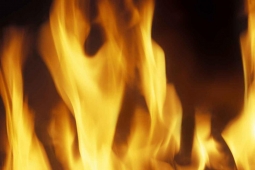 October 18, 2013 (El Cajon) – A brush fire east of the El Cajon Boulevard offramp on Interstate 8 in El Cajon burned a half-acre yesterday. Heartland Fire and Rescue crews from El Cajon and La Mesa responded at 11:30 a.m., finding the fire slowly climbing an embankment near the freeway. Crews put the fire out in less than ten minutes. Trolley service was temporarily stopped as a precaution.

The cause of the fire has been listed as undetermined due to numerous possible ignition sources found along the embankment, such as lighters and cigarettes. In addition, there was a large amount of vegetation and numerous homeless encampments in this area.

Fire investigators will be talking with Caltrans about the need to clear the brush and debris from along this area of Interstate 8, Heartland Fire indicated.

There were no injuries.