January 2, 2018 (La Mesa) – A female seen running from the scene of a small brush fire on a hill in the Eastridge area of La Mesa today has been detained for questioning by the Sheriff’s department.

Heartland Fire and Rescue, along with San Miguel Fire and San Diego Fire Departments responded to the blaze that began around 1:25 p.m.  Crews arrived within four minutes to find a 20 by 40 foot spot fire on a slope along High Street near State Routes 125 and 94 that grew to approximately an acre before crews halted the forward spread a half hour later.

No structures were threatened and there were no evacuations. Crews remain on scene to get complete containment around the fire 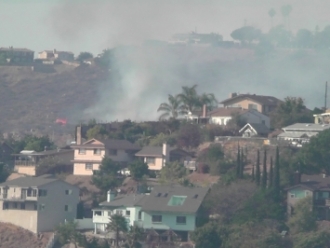 Cause remains under investigation.