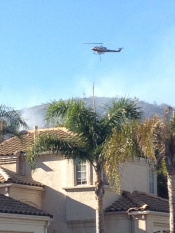 View a video of the fire

October 26, 2012 (Rancho San Diego)--A brush fire brought out the full firefighting strength of several fire districts on Friday afternoon. The blaze broke out at 3:15 p.m. on a mountain near Avenida Anacapa and Avenida Antiqua in Rancho San Diego.

According to Leonard Villareal, public information officer for the San Miguel Fire District, the fire was confined to a 2.5 mile area and by 4:30 p.m., the firefighting operation was reduced to mop up situation. Although the location of the fire was near Rancho San Diego Elementary School and Hillsdale Middle School, students were let out of class on a normal schedule.

Due to the fast reaction of local firefighters and water drops from the two fire suppression helicopters from the San Diego County Sheriff Department,  no evacuations were called by fire authorities.

Participating in the firefighting effort were the Heartland, Lemon Grove, Lakeside, and Santee fire departments, as well as Cal Fire, U.S. Forest Service, and Viejas.

"The situation was able to be quickly contained due to good communication and cooperation between all of these districts," Villareal said.