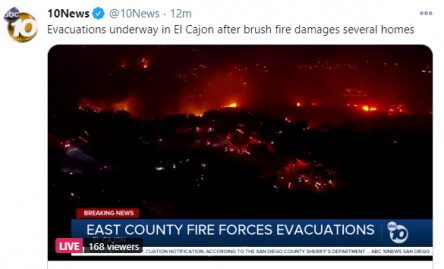 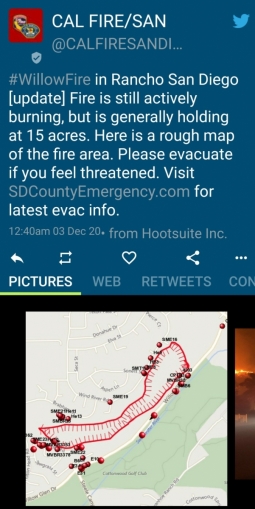 Update 3:50 a.m.Dec. 3 - Forward spread of the fire has been stopped. The fire has held at 25 acres per Cal Fire. Firefighters remain on scene and some road closures remain in effect.

Update 11:50 p.m.:  A temporary evacuation center is being set up at the Edwards Cinemas at 2951 Jamacha Rd.

December 2, 2020 (11:25 p.m.) – A wind-whipped brush fire has engulfed at least three homes in the Rancho San Diego area of El Cajon tonight. At least 15 acres have burned and the incident commander has reportedly indicated that the fire has the potential to reach 200 acres.

The #WillowFire started around 10:30 p.m. in the 2800 block of Willow Glen Drive near Hillsdale Road. Evacuations are in place from Wind River Road to Lim Rock Road.

The SDG&E outage map indicates power has been shut off to portions of Rancho San Diego and nearby communities of Spring Valley, Jamul and Dulzura.

CBS 8 and ABC 10 TV stations have news crews at the scene now. 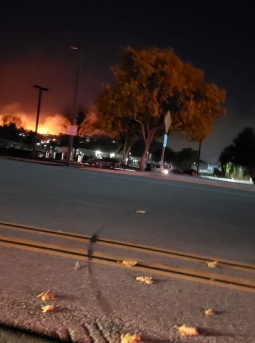 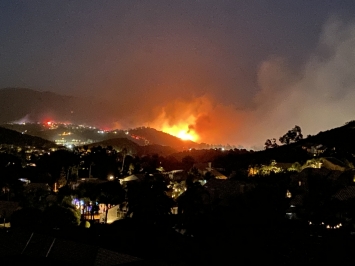 ed flag warning remains in effect due to strong winds and low humidity, with power outages in some nearby communities including Jamul. 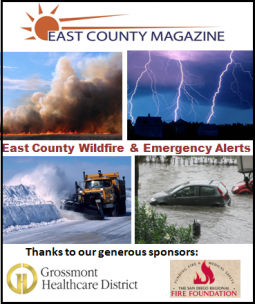 Photo, right, across from Valhalla High School, by Kenya Taylor

Sign up to receive free East County Wildfire & Emergency Alerts at the top right side of our homepage.  Also follow EastCountyAlert on Twitter for alerts on your cell phone.