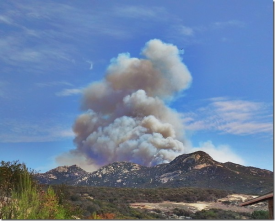 Update September 10, 2013, 8 a.m.  – The Lyons Fire has charred 450 acres and is 15 percent contained. No structures have been lost.  Rain overnight brought help to firefighting efforts.

Update 6:30 p.m. - Residents in Lyons Valley are being escorted back to their homes this evening, the Sheriff's media line has advised ECM.  ECM reporter Nadin Abbott advised the school that was listed by the Sheriff and County Emergency Services as an evacuation site is now closed.  The fire has charred 250 acres and is 10% contained.

Update 4 p.m. The Potrero Fire is 100% contained at 5 acres, Cal Fire reports. No structures were damaged but one burn injury was reported.  Lyons Fire in Jamul is 225 acres, Cal Fire confirms. Deerhorn Valley Antler editor reports all roads in Four Corners area are closed. Firefighters are concerned fire could move into Lawson Valley.  SDG&E is evaluating risk to Sunrise Powerlink. 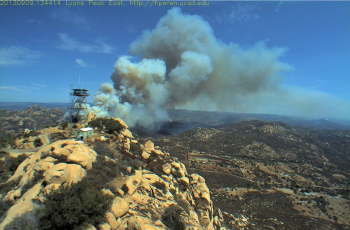 More details here: http://www.deerhornvalley.net/  Cal Fire says no evacuations are ordered but Sheriff earlier sent an alert advising evacuations (see below for details). Asked about this, Cal-Fire's MIke Mohler told ECM evacuations were not mandatory. However CHP indicated it was helping to clear the area and major roads were clsoed, raising a question of just what constitutes a mandatory evacuation.

Trailers are needed to help evacuation horses according to this post on the Deerhorn Valley Antler Facebook page: Brianna Dorantes

Update 3:20 p.m. Road closures are now in effect:  Skyline Truck Trail and spurs; Japatul Valley to be shut down at Lyons Valley.

September 9, 2013 (San Diego's East County) -- 1:30 p.m. A full wildland response has been ordered for a brush fire now over 50 acres in Jamul in the Four Corners area near Skyline Truck Trial, Lyons Valley Road and Deerhorn Valley Road.  Sources in the area inform ECM that winds are blowing at 10-15 mph and road closures are being considered.For more see http://www.deerhornvalley.net

Residents are being evacuated at 19100 Lyons Valley Road and areas east.  This fire has potential to reach 200 acres and reportedly was caused by a power pole. It is in an area that did not burn in 2007, the Deerhorn Vallye Antler reports.  Six airtankers have been dispatched. SDG&E has been 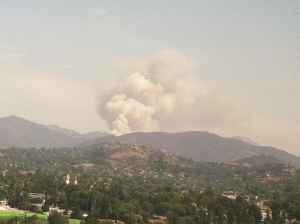 The smoke is visible as far away as El Cajon. Vincent Martin sent in the photo at right, taken from atop the El Cajon Courthouse.

ECM has just heard from a scanner tracker that some aerial resources from Jamul have been diverted to a new fire in Potrero that is now threatening homes. It has charred at least 5 acres and a burn victim is reported, according to IPN.

Note:  There have been no followups on a fire reported early in Santee at 125 and 52 which is presumably extinguished.