He said the District has held off making severe cuts up until now, dipping into reserves in hopes that the financial outlook would improve. But with another round of budget cuts from the state, tough choices can no longer be avoided.

A Budget Study Committee consisting of representatives from the LMSV District Board, Superintendent, and teachers’ representatives came up with recommendations for cuts that all acknowleded would be painful.  The committee's recommendations, a long with details on the severity of the problem, were shown in a Powerpoint presentation . 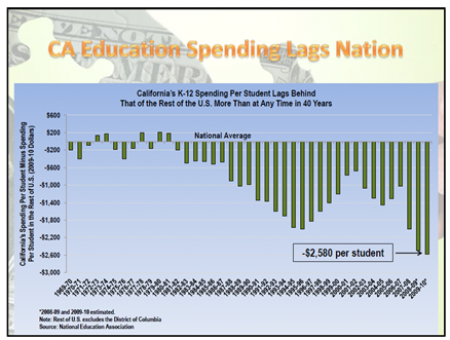 New cuts come on the heels of several years of defunding California's public schools.  California now lags behind the rest of the nation in per student spending on K-12 education for the first time in 40 years, according to the U.S. Department of Education.

That's before the next round of cuts are implemented, raising serious concerns about the impact on children's education here.

Governor Brown has proposed a budget that includes $12.5 billion in cuts but also looks to address the revenue shortfall to close a $25 billion budget gap. The Governor is asking the Legislature to put an initiative on the ballot to extend certain tax increases that are set to expire.

“There is a grave danger that tax extensions will not make it to the ballot,” Marshall warned, noting that passage would require several Republicans to join with Democrats for a two-thirds majority vote required. Even if approved by the Legislature, the measure might still fail to win approval from voters.

If that happens, numerous speakers warned, the outlook for local schools will get even worse.

A dilemma facing the district is that the deadline to notify teachers of lay-offs falls three weeks before the June election. So even if the measure is on the ballot and passes, tough choices must be made sooner, not later.

Among the most controversial proposals is a plan to cut Middle Schools from 6-7-8 grade to just grades 7 and 8, keeping sixth graders in elementary schools an additional year. The plan would save money for a variety of reasons.

Parents and teachers gave mixed opinions on the sixth-grade proposal.

Jennifer Bradford, president elect of the LMSV Teachers Association, opposed the plan, which she said would force elimination of an accelerated math program that allows students who excel to advance to algebra and geometry early. “This program took years for the math department to get approved in the high schools, and we are now the only district in East County that provides high-school credited geometry on the middle school campus,” she said. “This has led to some of the highest algebra scores in East County. One hundred percent of seventh grade students at La Presa Middle School who take the Algebra 1 CST score proficient or advanced; 85% of geometry students pass the high school geometry test and receive high school credit.”

Bradford said she would rather see P.E. (physical education) eliminated for sixth graders to save money. But given the national obesity epidemic, her alternative carries cost of its own in terms of long-term health impacts on the children.

A parent who volunteers for playground duty spoke in favor of the plan to move sixth graders back to elementary school. “They need the extra year in the classroom,” she said. “I think the majority of parents in our schools would want them to stay behind.”

Paul Schnaubelt, president of the LMSV Teachers Association, called the budget situation “dire” but said teachers have already sacrified by taking a 4 ½ percent pay cut, plus the teacher’s union has loaned $3 million to the district. “Salary should be the top consideration,” he said. Schnaubelt told the Board that “nearly 50% of our members have said they would need to seek additional employment if any more salary cuts are made.” He added that repeated cuts are “beginning to destroy the integrity of the system.”

Cynthia Bishop, a teacher, testified with a trembling voice, “This is the third year I’ll be receiving a pink slip.” She said she will “probably have to lose my home.”

Bishop criticized the Board for extending contracts for the Superintendent and three Assistant Superintendents until 2014, even though their contracts were not up for renewal until 2012. “The four people most removed from the classroom are the ones earning the most money in this district,” she observed.

Jerry Lecco, chairman of the Prop M Bond Oversight Committee, called on educators to join with other school districts to form a coalition and “let state legislators know what’s going on.”

Jay Steiger, with the Mt. Helix Council PTA, said it’s important for voters and parents to understand that “This special election is critical. As much as we don’t like taxes, these need to be extended,” he said. “The Governor’s budget is a C-, but without the taxes, it will be an F.”

Not a single person at the meeting voiced disagreement.

Brown does not plan to suspend Proposition 98, the state's minimum guarantee for K-12 and community college funding, though he may seek to do so if the tax hike extensions don't pass, the Sacramento Bee reports: http://www.sacbee.com/2011/01/04/3297230/brown-budget-will-spare-schools...

Brown’s proposed initiative would not raise taxes. It would, however, prevent some previous increases in sales, income, and vehicle taxes from expiring. The Governor has pledged that a substantial portion of those revenues would be directed to K-12 education funding. Without the taxes, another $9 billion in state budget cuts would be needed. Already, the Governor’s budget has proposed not only large cuts in education, but also cuts in many other programs, from slashing in-home services for seniors and the disabled to closing some state parks permanently.

David Yoshihara, Assistant Superintendent of Business Services, showed slides to indicate that a recovery has begun, but is happening slowly and expected to take several years for the economy to fully rebound. “What happens in Washington trickles down,” he said, then showed a chart indicated that “inequality in wealth” is having an impact on communities across America, where people have lost their homes and jobs. In California, which relies heavily on income taxes to fund education and other public services, and where unemployment remains at 12.5%, the impact is particularly severe.

The proposed cuts are not yet final, requiring a vote of the LMSV board.  But deep cuts appear inevitable.

Superintendent Marshall acknowledged that the budget process is painful, but tried to offer hope over the long term as the economy ultimately recovers. “As dire as the situation is, it will eventually improve.”

But not in time, however, to help students who will be immediately impacted, such as sixth graders, home schoolers, or students who rely on district-funded transportation to get to school.

A middle school employee, addressing the Board, summed up the sentiments of the crowd: “These cuts will hurt us all.”