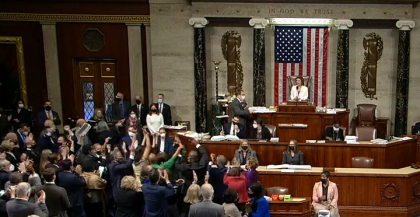 November 20, 2021 (San Diego) – On the heels of a major infrastructure bill signed into law by President Joe Biden, on Friday, the House of Representatives passed the Build Back Better Act on a party-line 220-213 vote, which now advances to the Senate.  The landmark measure would expand the nation’s social safety net for the middle class and poor including increased childcare, Medicare benefits, college aid, housing support, invest in shifting the nation to renewable energy and more.

The New York Times reports that even the pared-down $2.2 trillion measure “could prove as transformative as any since the Great Society and War on Poverty in the 1960s, especially for young families and older Americans.”

What’s in the bill

How it would be paid for

The measure would be funded largely through a surcharge ranging from 5% for people earning over $10 million or 8% for those earning over $25 million. It would also increase funds for the Internal Revenue Service to go after wealthy tax evaders, since the to 1% of earners are estimated to evade $160 billion in taxes a year, according to the White House. It would also provide modest tax increases on some larger corporations and provide incentives to keep jobs in the U.S., among other provisions. Savings on prescription drugs, by allowing Medicare to negotiation prescription drug prices, is also expected to also reap substantial savings to help fund the bill’s programs.

The Congressional Budget Office on Thursday estimated that the bill could increase the federal deficit by up to $160 billion over 10 years, though some dispute that figure based on disagreement over how much revenue would be raised through enhanced IRS enforcement on tax dodgers.

Two of East County’s Congressional representatives voted in favor, while one voted against.

Congressman Juan Vargas, a Democrat representing the southern portion of San Diego County, says the bill delivers “transformational action for American families” that would “lower childcare costs, establish universal paid family and medical leave, invest in clean energy to protect our climate, and extend the Child Tax Credit. I am dedicated to fighting for immigration reform.”

A provision that would have provided a pathway to citizenship for undocumented immigrants was removed from the bill to comply with a complex reconciliation process that allows only items that have a direct fiscal impact, though language protection some immigrants who have resided in the U.S. for many years remains. Vargas indicated in a Twitter post, “I am dedicated to fighting for immigration reform, and ask my colleagues in the Senate to keep the current protections in the bill and take them even further to create a pathway to citizenship.”

Congresswoman Sara Jacobs, a Democrat representing portions of East County and San Diego, praised tax cuts for working families, lower cost of health care premiums and prescription drugs, and getting Americans back to work that she anticipates will happen if the bill becomes law.

She also tweeted on Friday, “I made it a priority to ensure the Build Back Better Act addressed our child care crisis, and today, I voted to cut the cost of child care in HALF for millions and to give 35 million American families a tax cut through the expanded Child Tax Credit. We did it!”

But Congressman Darrell Issa, a Republican whose district includes rural and conservative portions of East County, issued a statement voicing his view that the bill “won’t build anything better.”  He faulted the measure for giving “billions to Green New Deal activists” at a time of “skyrocketing inflation and diminishing economic opportunity…”

Issa also opposed efforts to provide “amnesty” for some undocumented immigrants and claimed “Democrats aren’t interested in easing the high tax burden on tens of millions of Americans.”  He also faulted the measure for increasing funds for the IRS to collect unpaid taxes and criticized drafting of the bill “behind closed doors.”

The bill is expected to face a tougher time and likely undergo more changes in the narrowly divided Senate, where Democrats have exactly half the votes, with Vice President Kamala Harris the potential tie-breaking vote. But at least two moderate Democrats, Joe Manchin of Kentucky and Krysten Sinema of Arizona, have yet to state how they will vote.

Any changes would require the Build Back Better Bill, if passed by the Senate, to go back to the House for a reconciliation vote before it could advance to President Joe Biden for signature.

why was it ok for you to be a criminal and avoid jail???? now no one else can get a piece of the American dream. you are such a hypocrite!!!!