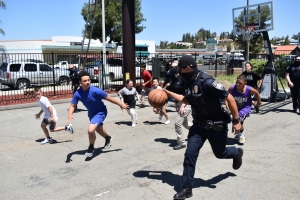 In an era when policing has been in the spotlight nationally, under scrutiny for over use of force incidents, perhaps this a glimpse of what can be.-

“I think it’s really encouraging that the police are taking the time to play with our kids,” said CEO of ECTLC Harold Brown. “We want the kids to know the police are our friends and they are just people that have a job to do.”

ECTLC Coach Joe Salas noted they have 26 kids on their co-ed team, named Home Court Advantage. The players range in age from 5 to 16.

One of those travel ball players, Geremiah Salas, 12, passed along his tips for players. 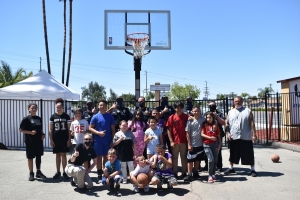 “Play hard, stay hydrated,” he said. “I’m good at defense, 3-points and dribbling.” As witnessed by multiple baskets he made during the non-regulation pick-up game his words were not just boasts.

“We’re going to try and not lose,” quipped ECPD Sgt. K. Gray. “We had a four-day practice regiment,” said Gray on how the police officers prepared.

The game was non-regulation time and the kids won 25-24. The atmosphere at the game? A fun-spirited game of hoops.

“We are really blessed to have them play our children,” said mom Marcella Valdez who has two of her kids on the team. “Because it shows them that they are not all about taking their fathers or mothers away. This shows them a different way of police activity.”

Shortly after this event, on April 24  the ECTLC held a groundbreaking ceremony for dorms that will house and serve their expanded family section in a nine-hour build live-streamed on YouTube and Facebook.

The ceremony, titled East County Transitional Living Center Building Hope for the Homeless Groundbreaking & Trench-To-Pour in 24, starts the construction of two new buildings in phase one.

The dormitories will house over 100 women and men. The number of kids living at ECTLC will increase from 180 to 250.

ECTLC is a 501(c)(3) nonprofit corporation that provides transitional housing and services. It has served the area for over 15 years.