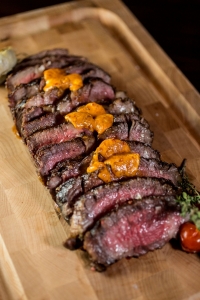 January 9, 2020 (San Diego’s East County) – In its first year of operation, the Bull and Bourbon restaurant at the Sycuan Casino Resort has earned the prestigious AAA Four Diamond Rating, one of three casino steakhouses in the San Diego region with the designation.

The Bull and Bourbon steakhouse features steaks cooked on a wood-fired Santa Maria grill. The restaurant has its ownbeef dry-aging room, complimented by single-barrel and other high-end bourbons.

The Four Diamond Award is earned by a restaurant providing a combination of the overall food, service, decor, and ambiance offered by the restaurant.