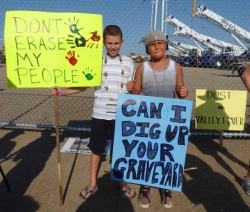 “Victory in the desert! We stopped the land grabbers,” exclaimed Denis Trafecanty, cofounder of the Protect Our Communities Foundation.

“Are we gonna stop ‘em again?” 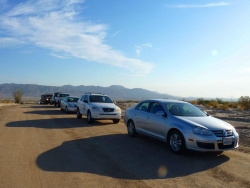 This band of patriotic Americans marched in the sand, as the Stars and Stripes Forever blared in the background.  Then they stopped and one by one, spoke out of their anguish and contempt, calling the project “greed energy, not green energy.”  https://www.youtube.com/watch?v=2OudBHD1ivk&list=UUPFDNB3EwJ6Oe_gfnFpiFcw&index=4&feature=plcp 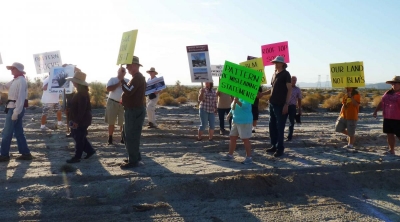 The project, if not stopped, will surround the small town of Ocotillo on three sides with towering 500 foot tall wind turbines.

The protesters, some 50 of them, also had a message for Governor Jerry Brown, who said opposition to big energy projects must be crushed:  “We will not be crushed!”  Video:  http://www.youtube.com/watch?v=b8RpAl8kJpY&feature=plcp

“What we accomplished today is that Pattern made a decision to cancel all work overnight and today when they heard about our demonstration,” said Trafecanty.  Other Ocotillo residents said they had heard earlier that Pattern got wind of the protest and opted to halt work in order to avoid confrontations with residents and media.

Pattern has stated that work is not scheduled every weekend.  The company has refused to discuss residents' concerns with ECM.

But ECM photographer Jim Pelley, an Ocotillo resident who has been documenting and photographing construction daily since the project began, said that in the past, workers were never given a day off except on the July 4 holiday and when the job site flooded seve 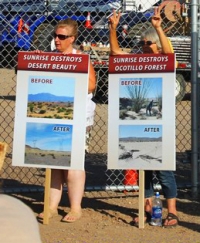 An award winning photographer and engineer, Pelley stands to suffer the worst impacts of the project.  “This project is surrounding my house on three sides. Every window that I look out, I’m going to see wind turbines as close as a half mile away….We’ve been dealing with ongoing dust issues which we continue to report on almost a daily basis. Nothing’s been done.”  https://www.youtube.com/watch?v=tXYBD3Kd55w&list=UUPFDNB3EwJ6Oe_gfnFpiFcw&index=6&feature=plcp

He complained of the flooding, which he said was caused by Pattern blocking waterways with roads and erecting huge berms that divert water. “Now you have a big raging river coming down through the town. It caused horrendous flooding in this last storm.”  A soil stabilizer in the floodwaters “looked like white paint coming down the road a very high, concentrated level,” he added.

Pelley has also been battling to get floodlights shut off at night.  “The last two weeks….I wake up in the middle of the night to a noise My house is shaking. They’re out there with a steel drum roller compacting sand…I’ve got lights shining right in my house, bright lights, big industrial flood lights. I’ve reported them numerous times. They say they’re pointing them down, but the problem continues.   I cannot even go outside and sit down and watch the stars, as I usually do.”

The destruction here is part of a broad national problem.   The U.S. government has identified 370 million acres of public BLM land as suitable for energy development including industrial-scale wind, solar, geothermal (which includes fracking), and biomass.  That amounts to twice the size of the state of Texas slated for destruction.  http://www.blm.gov/wo/st/en/prog/energy/renewable_energy.html

“There are at least two sides to every argument, and then there’s what’s right,” said David Secor, Democratic candidate for Congress in San Diego, where more wind projects are planned.  “We are on the right side.”  He pledged to oppose tax subsidies for the wind industry if elected and instead supports rooftop solar to meet renewable power goals. Video: https://www.youtube.com/watch?v=Bkw0BWNs_Zo& 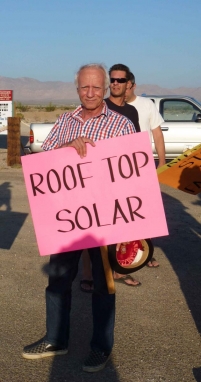 He faults the project  as “all about corporate greed” while sacrificing people and wildlife to give SDG&E “total control of energy in the area.”

Turning to several Kumeyaay Indian children present, he added, “It’s these young folks that we’re talking about here—preserving this for future generations. It’s our responsibility to leave them an environment worth living in.”

The children held signs reading “Can I dig up your graveyard?” and “Don’t erase my people,” references to the many cremation sites in Ocotillo, known as the Valley of the Dead to the Kumeyaay for thousands of years.

Shu’luuk , a Kumeyaay boy, told ECM, “We’re not going to leave. We’re going to stay here and stand our ground…We have more power here. This was our ancestors’ land!”  View video interview with the boys:  http://www.youtube.com/watch?v=bW_Rjel3azM&feature=plcp

A man holding a sign reading “Thanks for the flood” said a flood caused by Pattern’s construction washed out fields and the highway.  “Everywhere they scrape t he desert, everywhere they do that it creates a big dust storm,” he said. The same thing happened when SDG&E built Sunrise Powerlink here, he added. “We didn’t have that before SDG&E came alone.”  He stood in a road that measures over three times wider than the Environmental Impact Report allows—one of many seemingly flagrant violations that the BLM has failed to enforce. 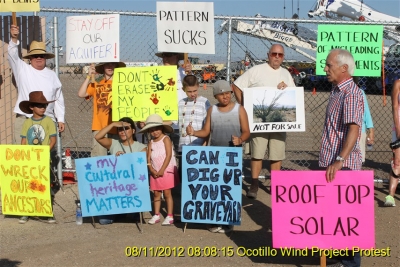 Terry Weiner, conservation coordinator with the Desert Protective Council, had this to say.  “Shame on the U.S. Department of the Interior and the Bureau of Land Management for not complying with their own regulations.” Ocotillo Wind is destroying Native American cultural heritage, habitat for endangered Peninsular Bighorn sheep, and also the quality of life of Ocotillo residents, she said.  “Their peace and quiet, dark skies, beautiful uncluttered views are going away and being replaced by the noise, dust, light and ugliness of an industrial zone.”

The National Environmental Policy Act (NEPA) requires that any development on public lands conform to the existing land use plan.  The Ocotillo Wind project is within the California Desert Conservation Area and is classified as Class “L”—Limited Use—for protection of the unique and sensitive plants and animals and the Native American ancient cultural landscape of the area, Weiner noted.  NEPA also requires the BLM to analyze a complete range of reasonable alternatives in assessing the need for public lands development, but no analysis  was done of local renewable energy alternatives such as rooftop solar here.

Donna Tisdale, chair of the planning group in Boulevard, offered troubling insights into Pattern Energy.  “They also built Kumeyaay Wind in 2005 up the hill (in Campo) and it had a catastrophic failure that they still haven’t explained , even though we’ve asked the Secretary of the Interior to let us know what happened. That’s the subjet of a $56 million lawsuit and those turbines are making people sick at a radius of at least three miles out…The same thing is going to happen  to this community-- and nobody’s having to answer for that.”  Video: https://www.youtube.com/watch?v=-qy2XOgGNFw&list=UUPFDNB3EwJ6Oe_gfnFpiFcw&index=1&feature=plcp

Howard Cook, a member of the Jacumba Sponsor Group, warned of fire dangers posed by wind projects, citing a wildfire in June in Riverside County caused by a wind turbine. “That’s what’s going to happen here and in McCain Valley,” he predicted.  Video:  http://www.youtube.com/watch?v=gMdM9oO7Xts&feature=plcp

Leon Thompson, who recently attended an international solar energy conference in San Francisco, said he is for green energy—but not industrial wind.  “The whole idea of generating renewable power is something we are all in favor of, but here they set aside all the environmental protections, all the Native American rights. This is public land. This is sacred land…This belongs to the people.”

He offered some compelling evidence that solar is indeed less costly than industrial wind.  “Solar thermal cells that used to cost about $1250 apiece now cost $265, which makes rooftop solar practical for most homes and for regional generation for a community to generate their own electricity on rooftops that already exist…You don’t have to ruin some desert to do this.  You can do it right in town, where energy is needed.” He summed up the sentiments of all here, concluding, “We don’t need this Ocotillo wind project.”  Video:  https://www.youtube.com/watch?v=za6tHCLn-90&list=UUPFDNB3EwJ6Oe_gfnFpiFcw&index=3&feature=plcp

A man carrying a “Save the Desert” sign claimed that “research shows that desert habitat absorbs about as much carbon dioxide than temperature rainforest. “No one would ever think of cutting down hundreds of acres of rainforest,” he observed.

For Pattern, each day of lost construction is significant, since the project must be built by year’s end to qualify for federal wind production tax subsidies that expire December 31.  Five lawsuits have been filed seeking to halt the development, but residents are no longer willing to wait—and have pledged to come back again, and again.

“Today I feel like we have won…victory for the day and everybody out there should see that’s  very important,” said Preston Arrowweed, an elder in the Quechan tribe.  He noted that it’s important not to destroy the balance of nature, from important medicine plants to bighorn sheep, coyotes and jackrabbits.  “It isn’t desolate and barren,” he concluded. “We have life here too. We should save it and preserve it.”  Video: https://www.youtube.com/watch?v=X6kL7JUy7kA&list=UUPFDNB3EwJ6Oe_gfnFpiFcw&index=5&feature=plcp 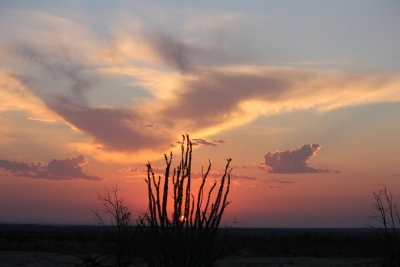