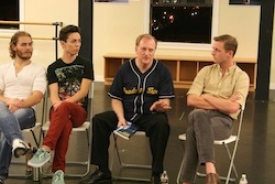 March 2, 2013 (Hillcrest) – Anti-bullying expert and ECM writer/reviewer Walter G. Meyer will be leading a discussion of bullying and school violence from 2 p.m. to 3 p.m. on Saturday March 9, 2013 prior to the 4 p.m. matinee performance of Punk Rock by Simon Stephens at Ion Theatre in Hillcrest.

President of the San Diego Unified School District's Board of Education, Richard Barrera will also be on the discussion panel along with ion’s Producing Artistic Director, Glenn Paris, who directed the play.

Meyer’s most recent book Rounding Third powerfully addresses the bullying/suicide crisis and was published just before started making the news. The novel was reviewed in East County Magazine when it first debuted: http://www.eastcountymagazine.org/node/2580 and Meyer is a frequent contributor to ECM.

He has been asked to speak and write about the topic for numerous newspapers and web sites including the San Diego Union-Tribune and he has spoken throughout the US, including at Penn State, Arizona State, SUNY-Jamestown, the Cleveland LGBT Center, and libraries in California and Pennsylvania. He coordinated an anti-bullying program with members of the San Diego School Board and City Council and he has been a guest on many radio programs to discuss the issue. Meyer has become recognized as an authority in the field and works as a consultant for Civility Partners, a company that does bullying prevention; he was asked by the nonprofit “No Bully” to become certified to do their in-school bullying interventions, and he has created webinars for SafeSchools and the nonprofit Acheiva. He recently was on a panel discussing bullying following a performance by Malashock Dance and at a screening of the documentary Bully at Canvass for a Cause on February 26.

A play Meyer co-wrote with Brian Bielawski, GAM3RS, was produced at ion in 2010. “I heard about Punk Rock and asked Glenn how I could help,” said Meyer. “I know how much ion likes to engage their audiences even after a performance.”

Rounding Third was based in part on Meyer’s high school experiences and Punk Rock is based on playwright Simon Stephen’s experience as a teacher. The play explores the underlying tensions and potential violence in a group of affluent, articulate seventeen year-old students as they prep for the next chapter in their adult academic lives. When a new classmate arrives suddenly, friendships are tested and allegiances shift amidst the pressures of everyday adolescence – with tragic results.

“Although it’s set in northern England, I think audiences will find the subject matter far too familiar and relatable,” Meyer added.

This is only the second U.S. production in the U.S. and it features returning ion artists David Ahmadian, Benjamin Cole, and the ion debuts of Ryan Casselman, Tyler Jones, Samantha Littleford, Charles Maze, Lizzie Morse and Samantha Vesco.

Punk Rock is the fourth production in ion’s current Season 7. For reservations and discounted tickets to the 4pm show, please call Ion Theatre at (619) 600-5020. The production is for mature audiences only. For more information on Walter G. Meyer and Rounding Third visit http://www.waltergmeyer.com