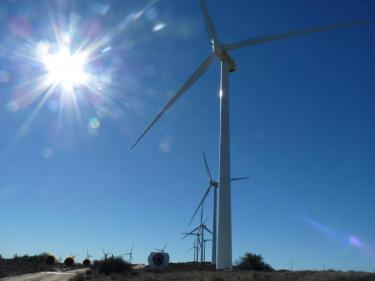 The Shu’luuk Wind project had proposed up to 85 wind turbines on 4,000 acres.  But residents and some tribal members raised objections including fire danger, noise and infrasound, and stray voltage.   A brush fire resulting from a turbine explosion in December at the tribe’s existing Kumeyaay wind facility added fuel to opponents’ arguments.

That was the second time turbines at the Campo reservation had been knocked off line by a major incident.  Four years earlier in 2009, a blue flash during a storm knocked turbines offline for months, resulting in replacement of all 75 blades and all 25 turbines.

Neighboring Manzanita tribal members have complained of health impacts ranging from sleeplessness to cancer that they believe are caused by the Kumeyaay wind turbines.  Stray voltage 1,000 times higher than normal have been measured inside homes nearest the turbines.

The Tule Wind project has met with substantial opposition from area residents and enviornmentalists.  It is planned in scenic recreational areas of McCain Valley at the gateway to three federal wilderness regions, also close to at least one Golden Eagle nesting site in the Carveacre area.  This week, rangers at nearby Lake Morena have advised that another Golden Eagle nest site is present there, though it was not listed in the Tule Wind EIR. Community groups are now gearing up for legal battles to fight the project in court.

Don Bureau of Indian Affairs. Kumeyaay: Native American people who have lived in South California and Baja California Norte for 12,000 years. Other names: various groups of Kumeyaay who share their culture and heritage but live in a specific region. Iberdrola is a privately owned company in Spain. Still don't see why they can crap in our backyard. Tom
One victory, one loss. So, the tribe doesn't want any of these environmental abominations in their own backyard (which is perfectly understandable) but they're perfectly happy to put them in someone else's. Typical.
Can someone please restate this article in understandable English?