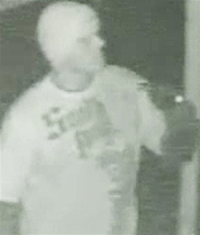 January 9, 2012 (Santa Ysabel) – A pair of thieves who broke into Dudley’s Bakery in Santa Ysabel early Christmas morning made off with the dough—no, not the kind used in breadmaking.  The pair stole cash after prying open a door.  Now the San Diego Sheriff’s Department has released infrared surveillance video of the Grinches who stole Christmas from the bakery’s owners—and asks for public help to identify the burglars.

From the video, the first suspect is described as a white man in his early to mid-20s, about 6'0", 200 pounds, clean shaven, possibly with a tattoo on the right side of his neck. He wore a light-colored print shirt that appeared to have the words "South Pole" (a clothing line) on the front, and knee-length shorts. The second suspect is about 5'7", 150 to 160 pounds and wore a dark colored hooded sweatshirt and dark pants.

“They pulled open drawers in several areas and then went fairly quickly to where the cash was held,” Sgt.  Joe Long with the Julian Sheriff Substation told ECM.

Dudley’s, a long-time veritable local landmark, does a brisk business each holiday season in its specialty breads.  The bakery is located at 30218 Highway 78 (Julian Road) in Santa Ysabel.