Update August 8: In a meeting between SDG&E and Rural Fire Protection District representatives on Thursday, SDG&e indicated it wants a single set of rules such as for vegetation clearance and sought to be exempted from overhead water sprinklers over electrical equipment. The RFPD suggested an inert gas fire fighting agent. “In the end, what we believe will happen is that SDG&E will comply, although there will be modifications,” said member Lou Russo. 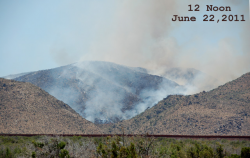 In a letter dated July 25, Fire Chief David Nissen accuses the utility company of failing to comply with fire mitigation measures. Further, he states that SDG&E apparently has no intention of complying--and instead the utility has asked the California Public Utilities Commission to let SDG&E off the hook for mitigation requirements.

“It is the understanding of the San Diego Fire Rural Fire Protection District that SDG&E has petitioned the CPUC for relief from fire mitigation requirements described in the DEIR/DEIS for the SDG&E ECO Substation project,” the letter reveals.

The ECO Substation is an electrical station proposed by SDG&E southeast of Jacumba. The project would also necessitate transmission lines and a 600% expansion of the existing substation in Boulevard. The substation would tie into Sunrise Powerlink, currently under construction through Alpine, and potentially a trans-border transmission line that the utility has sought permission from the federal government to build.

Chief Nissen’s letter reminds SDG&E that the Fire District had conditioned approval of the construction Fire Protection Plan on SDG&E entering into a Fire Services Agreement with the District, and obtaining approval of a fire protection plan/technical report. But he added, “SDG&E has made no effort to meet any of the concerns above.” The District has made several attempts to arrange meetings with SDG&E, to no avail, said Nissen.

Therefore, the letter continues, “in order to protect the interests of the Fire District and the residents and property owners…the San Diego Rural Fire Protection District has no other choice than to revoke the letter issued on April 15, 2011 approving the Construction Fire Protection Plan.”

Copies of the letter were sent to Iain Fisher at the California Public Utilities Commission (aei@cpuc.ca.gov) , Patrick Brown with the County of San Diego (patrick.brown@sdcounty.ca.gov) , and Cynthia L. Eldred, Es. At cindy@eldredlaw.com.

Lou Russo, a member of the Rural Fire Protection District and the Alpine Planning Group, provided this update in an e-mail sent to East County Magazine tonight. “We will finally meet this Thursday in the offices of SDRF attorneys to present SDG&E with required construction parameters for this substation within SDRF boundaries.”

The Jacumba border region has been the scene of several significant wildfires this season alone, adding fuel to area residents' concerns about the dangers of unmitigated fire hazards being added to an area already hard-hit by multiple wildfires in the past.

ECM has e-mailed SDG&E to request comment for this story and will publish the reply if received.