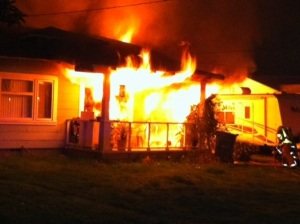 December 4, 2017 (San Diego) – If you lose your home or personal property in a natural disaster such as a wildfire or earthquake, or suffer theft, accident or vandalism, you won’t be able to deduct those property losses off your taxes after December. That’s because both the Senate and House versions of the Republicans’ tax bill eliminates these tax breaks.

Congresswoman Susan Davis (D-San Diego), who voted against the bill, told East County Magazine, “Our region knows all too well the devastation wildfires can do. The wildfire tax deduction is a way to ease the financial burden associated with the loss of or damage to a home. Ending the ability to deduct these costs just adds insult to injury.”

Congressman Duncan Hunter voted for the bill.  In a statement issued at the time, he said he supported the tax-cutting bill to “invest in our economy, create jobs and promote business growth” but acknowledged that the bill was imperfect.

The measure is now going through a reconciliation process in both houses to resolve differences in the House and Senate versions, after which it will go to President Donald Trump to sign.

If signed into law, it would eliminate the deductions started next year.

The bill grandfathers in flood victims from this year’s devastating hurricanes that struck Texas and Florida, but the House Ways and Means Committee chairman specifically rejected a request from California legislators to add in protections for the California wildfire victims, who now must complete damage assessment in the next three weeks before year’s end – a nearly impossible task—if they wish to claim the deduction before it expires.

Future victims of large disasters could potentially get tax relief if, and only if, Congress chooses to allot it.  But people who suffer losses in individual fires, accidents, thefts or small-scale natural disasters will not have even that option.

Congressman Mike Thompson, a California Democrat whose district includes most of the October 2007 California firestorm survivors, calls the elimination of the deduction “cruel” and “heartless”, the Los Angeles Times reports.

San Diego’s East County has suffered some of the worst wildfires in our state’s history, including the 2003 and 2007 firestorms.  Rep. Hunter’s father, the former Congressman Duncan Hunter, Sr., lost his home in the 2003 Cedar Fire.

Asked if Rep. Hunter plans any action to try and get the deduction restored, Hunter’s District Chief of Staff and Communications Director Mike Harrison told ECM in an e-mail, “Congressman Hunter is not on the committees (House Budget/House Ways and Means) that will be involved with the House and Senate conference.  The only opportunity he is going to have for input will be a final vote on the measure if it goes to the House floor.”

That statement conflicts, however, with the fact that just days ago, Rep. Hunter signed a letter along with other California Congressional members asking the Chair and Ranking Member of the House Ways and Means Committee to add funding for disaster relief for California wildfire victims to a disaster aid measure. Though Hunter is not a committee member, there would be nothing stopping him from sending a similar letter asking committee members to restore the tax deduction for Americans who suffer losses due to natural disasters or other casualties.

This is a continuing Republican lie. Profits will go to "business growth" as money to the richest people in the nation.