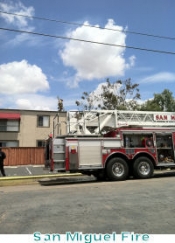 The news ires some district residents, who contend that taxpayers are getting burned.

According to district public information officer Leonard Villareal, Cal-Fire has expressed interest but thus far no proposals have been received; deadline for submissions is 4 p.m. on March 9.

A statement on the District’s website notes that this is the fourth year of budget deficits. “ In an attempt to eliminate the structural budget deficit, return Fire Station 23 on Dehesa Road back to full staffing/full service, and potentially improve direct emergency services to our customers, the Board of Directors has authorized that a Request for Proposal be issued to surrounding fire agencies,” the website states. “Once the proposals are submitted to the District the Board will evaluate them and discuss the possibilities for a shift in how service is provided or pursue other alternatives to our long-term budget deficit.”

A combination of factors have led to the current crisis.  Property tax revenues have fallen in the economic downturn, reducing district revenues. But the district’s board and labor have also taken heat for decisions that exacerbated the problem.

Notably, a contract to provide fire service to Lemon Grove, since cancelled, stuck the district with a bill for lifetime benefits for five Lemon Grove firefighters, costing almost $70,000 a year, the UT-San Diego reported.  Chief August Ghio is the highest paid Fire Chief in San Diego County with a $214,442 salary, according to the State Controller’s office.

Some critics have also called for a reduction or elimination of health benefits for part-time board members, which cost the district $93,000 total per year—higher than any other local district, the UT reported.  Others have faulted labor for not making deeper sacrifices.

Both management and labor have absorbed some cuts.  “The board has already done everything they can, labor has done a lot in terms of rolling back benefits and other compensations. We’ve cut a lot of positions,” Ghio told a community group meeting last week.

But it has not been nearly enough to stem the tide of red ink.  In November Chief Ghio announced termination of firefighting services at the Dehesa station, paring down staffing to a two-man medical crew.   The same could happen next to Mount Helix, he has warned, if the budget situation does not improve.

“We all want "gold-card" services but sometimes our "beer budgets" can't allow such. It may be time that the residents of Crest reconsider a volunteer program and de-annexing from SMCFD (if that is possible).,” James Drogo, a retired firefighter who is currently writing a book on the history of Crest’s fire department prior to its incorporation into the San Miguel District, told ECM.  Drogo notes that San Miguel currently has much more rigid training requirements for firefighters than some other districts, such as Riverside.

As for the possibility that  San Miguel might contract Crest to CalFire, Drogo notes, “This means to me that San Miguel cannot provide the services that it is committed to. If SMCFD were to contract to CDF it would not be unusual for them to still collect thousands of dollars as an "administrative fee."

In an interview with Mount Helix Patch, Ghio denied that the board is “deconstructing the fire distrct,” adding, “That’s not true.”  But he said it makes sense to “reach out to other agencies and say `Hey, is there another way to do this?’”  He emphasized that “a lot of people don’t really care what the patch n the shoulder asys or the color of the fire apparatus. What they want to know is when I call 9-1-1, am I gonna get EMS service as rapidly as I’m getting it now, or better than I’m getting it now?  Whatever the board decides to do, it will be in the best interest to the customer.”

Some area residents are fuming over the situation.

“What they need to do is replace the board and put people in there who will spend the money wisely ,” said Pat Riggs, whose husband serves on the Crest-Dehesa-Granite Hills-Harbison Canyon Subregional Planning Group. “Anyone I know who lives in the San Miguel area is extremely upset with them.” She faults the board for “running the agency into the ground….Board members need to be accountable to voters for their actions.”

She called cutting the Dehesa firefighting “absolutely ludicrous” and said it leaves people vulnerable. She also claimed that a grant from an Indian tribe was not spent on its intended purpose .

Wally Riggs, Chairman of the Crest-Dehesa-Granite Hills Harbison Canyon Subregional Planning Group had this to say. “We pay our taxes to provide firefighting. What they did to bring their finances to this point was abhorrent,” he said, criticizing healthcare benefits for board members. “It may have been legal, but it’s certainly unethical.”

If request for proposal applications are received by the March 9 deadline from other fire districts seeking to takeover district responsibilities, a metrix of factors will be used to determine whether applications warrant consideration or to rank applications if more than one are received, Villareal told ECM.

Its a great thing that Now a days Indian Software Companies growing rapidly and offers the Software companies is witnessing a rapid growth and offers well- paid job opportunities making IT a Prime career option for the youth. Software Company in Odisha