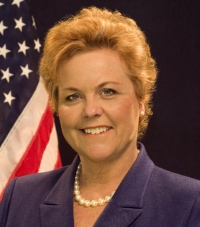 June 9, 2010 (San Diego) – Francine Busby, who received 43% of the vote in her 2006 run against incumbent Congressman Brian Bilbray (R-San Diego) has won the Democratic primary by a nearly 66% to 34% margin over consumer attorney Tracy Emblem.

“I’m looking forward to working with Tracy and her campaign team to return responsible and representational government to our district,” Busby told East County Magazine. “We worked hard, and it’s good to be moving on from here.”

A member of the Cardiff School Board, Busby has pledged to restore ethics to the district formerly represented by jailed Congressman Duke Cunningham, who was convicted of bribery. Busby has taken zero money from political action committees (PACs), raising $364,000 from individual donors as of the last reporting filing.

Bilbray, by contrast, has raised $765,000, including 36% from special-interest PACs. He has received contributions of $10,000 or more from numerous special interests including the agribusiness, defense, insurance, pharmaceutical, electric utilities, real estate, liquor, and construction industries as well as conservative political groups.

Busby's goals include helping San Diego capitalize on economic growth opportunities in the bio-tech, clean-tech and high-tech sectors. Other priorities for Busby include veterans care, ending the wars, improving healthcare and preserving the environment.

Bilbray is running on a platform of reducing federal spending, toughening immigration laws and providing tax incentives for businesses.