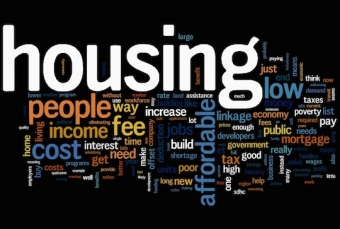 October 3, 2018 (San Diego) -- One of the most important initiatives on the statewide ballot is Proposition 1, a four billion dollar bond measure to fund affordable housing construction, as well as rental and home loan subsidies. View a short video by Cal Matters here, and scroll down for more details.

Specifically, the money would be used to build and renovate rentals, offer home loan help to veterans, construct additional housing in dense urban areas and near public transit,  and to provide down payment assistance and other aide to low and moderate income homebuyers. It would also provide loans and grants for agriculture workers housing.

The Legislative Analyst’s Office estimates that paying back the bond with interest would cost the state about $170 million a year for the next 35 years. That’s about one-tenth of one percent of the state’s general fund.

Those in favor argue that the state faces an unprecedented housing crisis.  California has the highest poverty rate in the nation when housing costs are factored in, and homelessness is a huge and growing problem, Cal Matters reports. In San Diego, 57 percent of renters are cost burdened, paying more than 30 percent of their income for rent, a study by Apartment List found.

Proposition 1 would help over 55,000 people meet housing costs while also adding affordable housing that is currently in short supply.

Those against argue that while the measure would provide a short -erm increase in housing construction, it doesn’t address the long-term affordable housing shortage and would increase the state’s debt.

The state faces an unprecedented housing crisis. All told, this will help more than 55,000 people meet their housing costs, while also adding some desperately needed affordable supply.

Proposition 1 is supported by a broad coalition that includes the California Democratic Party and Gavin Newsom, the Democratic gubernatorial candidate, as well as by the California Federation of Labor, California Chamber of Commerce, League of Conservation Voters, and the American Legion.

Prop 1 is opposed by the California Republican Party and John Cox, the Republican candidate for Governor.