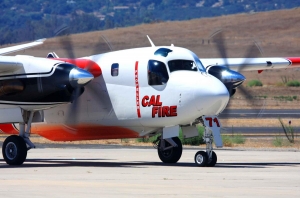 September 4, 2010 (Ramona) -- Aerial firefighters continue battling the Cowboy Fire, which is currently 65% contained with full control predicted Monday night. If not for this Ramona air field,  brush-covered open spaces in our backcountry would be even greater threats to residents throughout San Diego County. 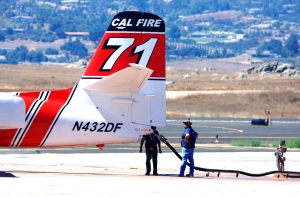 Whenever there is an active fire, the Ramona Air Attack Base becomes a busy place for air traffic controllers and crews. Air attack ground crews direct air attack planes into the loading station where trained staff load fire retardants. The waiting pilots remain strapped into their seats without a break. In a few minutes, the aircraft are heading back toward the runway for another air drop.

Fighting a Fire from the Air

Aircraft have the ability to get into remote areas of an out of control fire. These planes and choppers have the ability to slow a fire’s spread, while aiding the firemen fighting flames below. Firefighters can get in danger when the fire starts to overtake them, so the air attack aircraft can be called in to save their lives by putting down a protective layer of retardant near a crew on the ground.

The results can be dramatic, such as during the rescue of climbers trapped on El Capitan Mountain during the Monte Fire. If not for water drops very near the rescue operation, where the last two people saved escaped flames just twenty feet away, lives would likely have been lost.

The Ramona Air Attack Base is the oldest aerial firefighting facility in the United States. The Base was established in 1957 and remains one of the most active firefighting facilities in the country. Aircraft stationed on site include two air-tankers, one air-attack plane and one medium helicopter.

Aircraft are just one type of tool in fighting wildfires. The Ramona air attack base provides parking, retardant loading, and refueling areas for firefighting aircraft on a year-round basis. 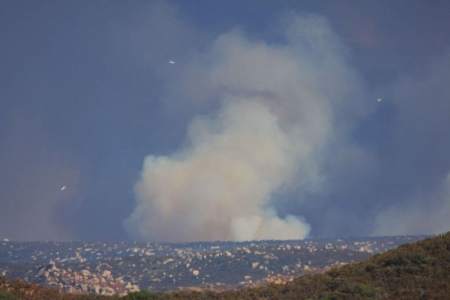 The Ramona fire fighting aircraft respond to an average of 350 fires each year. In order to be prepared; the base has a 52,000 gallon storage tank of retardant. The crew and equipment are able to load the planes at a rate of 500 gallons per minute. Air tankers loads are normally dropped at about 100 feet over the ground level. Retardant is dropped near or on the wildfire, depending on the target.

With every-load of retardant delivered to the front lines of a fire, brave pilots may be constrained by mountains, uneven terrain, deep ravines, down drafts, electrical wires, smoke and other hazards.

My hat is off to those who risk their own lives while protecting the rest of us; thank you for your service.