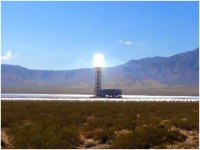 Some butterflies appeared singed, while others seemed to have fallen from the sky. Careful observation with binoculars showed that the butterflies were congregating near the boiler at the top of the solar tower, apparently attracted by the bright light, as were many other insects.

Birds then flew into the path of destruction, attracted by the insects on which they feed.

Ivanpah proved by far the deadliest; 141 of the total 233 bird deaths found were at Ivanpah.  Only Ivanpah caused death by solar flux (47) due to its unique technology.  Desert Sunlight  also had a high number of bird deaths (61), mostly from impact trauma and predation – troubling since photovoltaic technology is common.  Genesis had 31 bird deaths at its facility, most from undetermined causes.

At Ivanpah, some birds flew into the solar flux and actually ignited. Others, burned and injured seriously, were later devoured by predators on the ground.  Still others were killed by impact after flying into the solar equipment.  A lake effect of shimmering solar panels may also be attracting migratory birds such as waterfowl.

Morever due to predation and some birds that may have flown farther afield than the study areas at the sites, the authors conclude the true number of deaths is underestimated, “perhaps vastly so.”

The authors propose possible steps to reduce deaths ranging from netting to making equipment less attractive to birds, though it is unknown how effective such steps would or would not be.

No solution, however, has yet been found to the massive butterfly deaths chronicled only at Ivanpah, raising serious concerns about the prospect of any future facilities using the solar flux technology being approved particularly along routes taken by migrating monarch butterflies or birds.