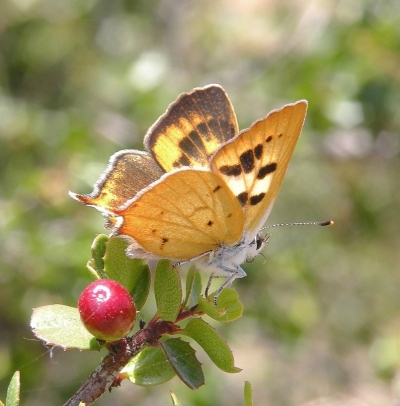 Photo by Michael W. Klein Sr. via U.S. Fish & Wildlife Service: Hermes copper butterfly is found primarily in San Diego County, as well as northwestern Baja, Mexico.
By Miriam Raftery
January 14, 2020 (San Diego) – The U.S. Fish and Wildlife Service last week announced a proposal to add the Hermes Copper Butterfly as a threatened species under the federal Endangered Species Act.
The butterfly is found only in San Diego County and northwest Baja California, Mexico, but wildfires including the 2003 Cedar and 2007 firestorms have decimated most of its habitat, as have development.
Now, the USF&W wants to designate 35,000 acres of protected critical habitat in San Diego County  The plan also calls for a captive breeding program and reintroduction into the wild.
The federal wildlife agency has been coordinating with the San Diego Association of Governments (SANDAG) and the U.S. Marine Corps on the preservation project, according to Paul Souza, regional director of the USF&W’s Pacific Southwest region. The habitat protection includes exceptions for firefighting, fuel breaks and other public safety actions.
The butterfly has orange and brown on its wings and yellow underneath with black spots. They lay their eggs only on spiny redberry bushes, found only in chaparral and coastal sage habitats. It has declined from 57 known populations in San Diego County historically to just 11 remaining as of 2011, in locations as far as 45 miles inland.
The proposal follows 28 years of petitions and several lawsuits filed by the Center for Biological Diversity seeking protections for the Hermes Copper Butterfly.
Tara Cornellise, a scientist at the Center for Biological Diversity, says, “Californians love their native butterflies, and it’s important to protect San Diego County’s remaining islands of habitat for this rare butterfly... The decline of the Hermes copper has mirrored the destruction of Southern California’s native ecosystems. Urban sprawl, rampant wildfires and climate change are a triple threat to this beautiful butterfly, which desperately needs Endangered Species Act protection.”
A 60-day public comment window on the plans ends March 9. To submit comments, visit Regulations.gov and search for FWS-R8-ES-2017-0053.