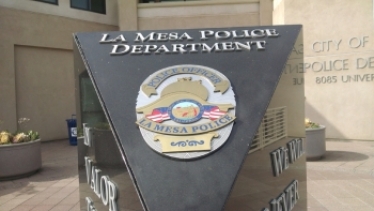 March 2, 2017 (La Mesa) –The popularity of selling goods using the internet has substantially increased over the last decade, which has also increased criminal activity during the sale of these items.  So today, La Mesa Police Department announced designation of two parking stalls on the east side of the police station as a “transaction zone” for La Mesa residents engaging in e-commerce.

The stalls are clearly marked by lines delineated by orange paint and a sign designated as the “Transaction Zone.”

Although citizens may trade in the parking lot, police personnel will not be monitoring or assisting the public with any transactions which occur on the police department’s property, a press release makes clear, adding, “The La Mesa Police Department will not be responsible for any portion of the transaction.  This is simply a way for La Mesa citizens to conduct their transactions in a well-lit and public location.”