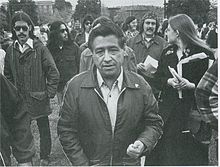 April 1, 2013 (San Diego)- In honor of César Chávez day, all  state administrative offices, most local government offices and schools will be closed today, and all trash/recyclables will be delayed by one day. For a full list of closures and the businesses that will remain open, visit: http://fox5sandiego.com/2013/04/01/closures-for-cesar-chavez-day/#axzz2PEZ9g7Tf.

Chávez was born March 31, 1927. He became active with the Community Service Organization, which helped fight racial and economic discrimination against Chicanos. He co-founded the National Farm Workers Association in the 1960’s. He believed in non-violence and organized strikes and boycotts to gain rights for migrant farm workers, gaining support to have his organization be the first successful farm workers’ union in the United States. Up until his death on April 23, 1993, he remained president of United Farm Workers of America (AFL-CIO).

UC San Diego has a full weekend of events honoring Chávez and Chicanos that started Friday March 29 and goes to Saturday May 25. Visit: http://blink.ucsd.edu/HR/policies/diversity/chavez.html. This includes the 35th annual cultural celebration this Saturday April 6 from 10 a.m.- 4 p.m. at Thurgood Marshall College.