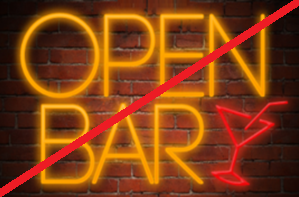 June 28, 2020 (San Diego) – Across the U.S., states and counties that reopened broad sectors of their economies are rolling back some business re-openings as COVID-19 cases spike. On Friday, the governors of Florida, Texas, and California all ordered total or partial shutdowns of bars in efforts to slow the spread.

Today, Governor Gavin Newsom announced that the state has ordered bars in six counties to shut down and recommends that bars be closed in eight additional counties.

So far, San Diego is not on either of those lists and bars remain open, though that may change as the county's rate of hospitalizations from COVID-19 climbs.

The state guidelines for bars in counties where bars have been ordered closed include both indoor and outdoor bar settings, as well as brew pubs and wineries, despite the fact that some venues such as winery patios have ample social distancing of tables and fresh air, unlike some cramped, urban indoor bars where patrons are accustomed to partying.  Venues that serve full meals with alcohol can remain open.

Imperial County, where 23% of tests have come back positive, prompted the Governor to go farther, ordering a return to full lockdown. Hospitals became overwhelmed in Imperial County, located due east of San Diego, prompting transfer of patients in Imperial County to be transported long distances to facilities in neighboring counties, including San Diego.

Statewide, 5.7% of test results reported Friday were positive, up from 4.7% a week earlier; many community outbreaks and an increase in hospitalizations have also occurred across the state.

In San Diego, officials have begun cracking down on businesses that fail to follow county and/or state health guidelines.

In May, the County shuttered a Pacific Beach bar, El Prez, after photos on social media showed bar-goers packed into the facility without social distancing just one day after the facility reopened.  That owner demonstrated contrition, apologized, and has since been allowed to reopen with modifications. Others have received warnings for lesser violations. Several outbreaks have been tied to restaurants including at least one that prompted a temporary closure.

On June 25, County health officials also shut down Hernando’s Hideaway, a restaurant and bar located at Lake Hodges.NBC 7 reports that the owner has been defiant.  Despite four health inspections that found serious violations such as lack of social distancing and employees not wearing masks, when the Department of Environmental Health visited on June 23, owner Rick Williams reportedly "admitted that he was not compliant and stated he will continue to operate without these COVID preventative measure and will not require staff to wear face coverings."

More rollbacks may be coming locally if the situation doesn’t improve soon.

On Friday, the County’s Health and Human Services Agency reported record high numbers of new COVID-19 infections (440), the fourth day in a row with over 300 new cases.

Even more alarming, the average number of hospitalized patients with COVID-19 locally has jumped by 19% in three days, the County reported on Friday.  An increase above 10% in hospitalization rates is one of the triggers that could mandate new restrictions, if it continues.

U.S., global, state and county health officials urge everyone to follow accepted guidelines to protect the public health and strive to control the pandemic.

“The spike in cases in recent days shows that the pandemic is far from over and we must all continue to do our part to keep infection numbers down,” says Dr. Wilma   Wooten,  County public health officer. “This includes wearing a face covering when out in public, practicing good hand hygiene and staying home if you are sick.”

While health experts agree on the importance of these actions, President Donald Trump has drawn sharp criticism even from his own healthcare leaders for failing to take action at a national level to require shutdowns and mask wearing nationwide or even in areas with major outbreaks, nor even to serve as a role model; the President has refused to wear masks in public or private, and the staff of his campaign removed social distancing stickers at an arena where the President held a rally in Tulsa, Oklahoma last week, video revealed. Since the rally, Tulsa has seen a sharp spike in COVID-19 cases, the Washington Post reports.

U.S. Health and Human Services Secretary Alex Azar warned Sunday that the "window is closing" for the U.S. to get the coronavirus pandemic under control, as confirmed cases are surging in a majority of the nation, with some states facing record numbers of hospitalizations.

The European Union, which had a similar number of cases as the U.S. in late March and early April, by contrast has had its rate of new COVID-19 cases plummet, while in the U.S., they have surged, as ECM reported on June 25.