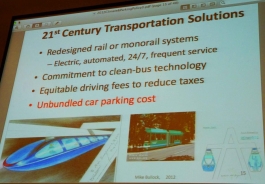 To accomplish that, the state has set ambitious goals to reduce greenhouse gas emissions--and mandated that counties reduce driving and encourage public transportation.

But the San Diego Association of Government (SANDAG) failed to meet those goals in a Regional Transportation Plan(RTP) that it approved last fall. Now, California Attorney General Kamala Harris has joined with the Sierra Club, the Cleveland National Forest Foundation, and other environmental groups to sue SANDAG.

SANDAG initially approved a plan to increase the number of freeway lanes per mile by 38% back in 2007.  The new  RTP further expands freeways throughout the county.

Last month, Attorney General Harris and the Sierra Club simultaneously filed suits against SANDAG for failing to attend to problems with the climate and air pollution within San Diego County. They also alleged that SANDAG has deferred working on public transportation projects en lieu of expanding freeways.

“There’s no rationale for expanding our roads,” Bullock asserted at UnitedGREEN. “Cars are already responsible for 40% of GHG (Greenhouse Gas) emissions in San Diego County.”

He advocated investing instead in clean bus technology and mass transit such as trains or monorails, along with other steps.  While the plan does includes some transit improvements, critics contend it doesn't go far enough--and that SANDAG's plan would actually increase greenhouse gas emissions over time.

In September 2010, SANDAG was given a GHG emissions directive from CARB, (California Air Resources Board) which, per their request, showed only a 13% decrease for the year 2035. Today, SANDAG claims it can reduce GHG emissions by 19%.

"The 3.2 million residents of the San Diego region already suffer from the seventh worst ozone pollution in the country," said Attorney General Harris in last month’s press release. "Spending our transit dollars in the right way today will improve the economy, create sustainable jobs and ensure that future generations do not continue to suffer from heavily polluted air."

But SANDAG spokesman Charles "Muggs" Stoll defends the RTP.  "We believe it's a very good and balanced plan for our region," he has stated. "So to the extent that somebody wants to challenge it, we're prepared to defend it."

For more information about the San Diego chapter of the Sierra Club, visit http://sandiego.sierraclub.org/home/index.asp.