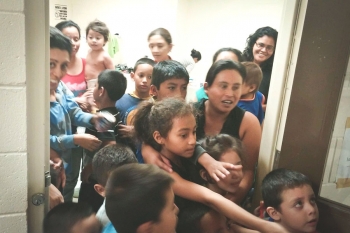 August 21, 2014 (Sacramento)—Over 50,000 unaccompanied minors fleeing Central America have streamed across U.S. borders, seeking help to escape desperate situations. Now some California lawmakers want to assure that kids facing a humanitarian crisis will receive full legal hearings to determine if they may be eligible for asylum, refugee status, or deportation. A new bill would provide $3 million to nonprofit groups to expand legal services for the children.

After visiting a detention center recently, Assembly Speaker Toni Atkins (D-San Diego) told reporters, “I think we all came away with a feeling that these kids really needed our support, that it was about their safety, their due process, the ability to look beyond bigger political considerations and deal with a humanitarian crisis.”

Governor Jerry Brown announced the measure, stating, “Helping these young people navigate our legal system is the decent thing to do and it’s consistent with the progressive spirit of California.”

The language has been added as an urgency measure in a budget cleanup bill, the Sacramento Bee reports. That means it could take effect immediately with funds available in just a few weeks.  Atkins believes Democrats have enough votes to pass the measure without a single Republican vote.

The measure faces opposition from Republicans including Assemblyman Don Wagner from Murrietta, where protesters forced busses full of immigrants to turn around, casting a national spotlight on the issue.  Wagner has called the bill an “inappropriate use of taxpayer money.”

But Atkins says the money will come from savings pared back elsewhere in the budget.

Yet another bill has been introduced by Senate President Pro Tem Darrell Steinberg to help the immigrant minors.  His measure would instruct state courts to evaluate the cases presented by immigrant minors, since those who obtain legal permanent resident status are protected from deportation and eligible for citizenship. Too often, Steinberg said, these children show up at court only to learn that they don’t have the required finding from a state court first.

A separate bill would direct state courts to evaluate the cases being presented by immigrant minors, an often-overlooked first step for them to obtain legal residency from a federal court. Immigrants who obtain legal permanent status are shielded from deportation and become eligible for citizenship.