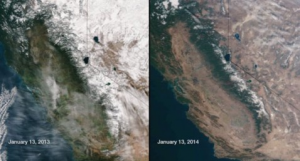 March 14, 2015 (San Diego’s East County) – California could run out of water in a year as reservoirs run dry and groundwater resources are being overpumped.  That’s the dire warning of Jay Famiglietti, senior water scientist at the NASA Jet Propulsion Laboratory/Caltech.

In an editorial just published in the Los Angeles Times, the NASA water expert states, “We’re not just up a creek without a paddle in California – we’re losing the creek, too.”  He calls on state officials to implement immediate water rationing to preserve the state’s shrinking water resources.

January this year  was the driest January since the state began keeping records in 1895.  After several years of record drought, groundwater and snowpack levels are at all-time lows.

NASA images taken in January 2013 and January 2014 show dramatic shrinkage of snow packs and water resources, though those images do not account for recent rainfall this past winter, which other NASA images show have temporarily greened some portions of the state.

Still other NASA satellite images reveal that statewide, water has dropped 12 million acre-feet since 2011, with two-thirds of those losses due to groundwater pumping for farms in the Central Valley, where the federal government has cut off all water allocations.  Those pumping rates are unsustainable and wells are running dry; some farmland is sinking by a foot a year or more in the Central Valley, Famigletti warns.

NASA’s top water scientists wants the state to speed up implementation of the Sustainable Groundwater Management Act of 2014, which currently could take 30 years to implement. He also calls for mandatory statewide water rationing and urges the public to “take ownership” of this issue by demanding transparency in water policies.

A Field Poll taken recently shows 94% of Californians believe the drought is serious and a third would support mandatory rationing.

That may happen soon.  The Sacramento Bee reports that the State Water Resources Control Board meets Tuesday and will consider a proposal to restrict landscape watering, which accounts for 70 percent of all urban watering in our state.  The board is expected to order all urban water agencies in California to restrict outdoor watering to only certain days of the week for residential and business customers – perhaps as little as two days a week in some communities.   Running irrigation for 48 hours after measurable rainfall would also be banned.

That would be unprecedented, more sweeping than any prior mandate even during the last major drought in 1977.   But state residents are not doing enough on their own; Californians lowered their water use less than 9 percent over the past two years, from January 2013 to January 2015.

It won’t be  just big water agencies impacted.  The order, if approved by the state, is expected for the first time to include 2,500 small water providers serving less than 3,000 customers and require them to reduce water use by 20 percent.

Consumers who fail to comply could pay huge fines of $500 per violation per day.

If you need help to conserve, such as finding manuals for irrigation timers that you may have lost, you can visit SaveOurWater.com.

The State’s water board is also looking to implement a water-waste hotline for people to report wasteful water consumption.

Commercial mega farms use the most water at low subsidized rates. It's not caused by homeowners with a lawn and garden. Visit these sites for water information. http://www.sdcwa.org/ http://www.hwd.com/
That said seems to me there should be a different priority allocation for those farmers with seasonal crops, that could go fallow for a season or longer, vs. those with mature fruit or nut trees that can take decades to mature.
Looks like another Grapes of Wrath. Going the other direction.