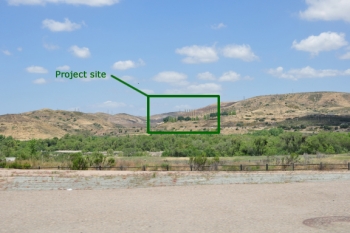 March 21, 2012- The California Energy Commission (CEC) will hold a workshop at 5 p.m. this Thursday, March 22 at Mission Trails to discuss the proposed Quail Brush Generation Project being developed by Quail Brush Genco, LLC, a subsidiary of Cogentrix Energy.

According to project documents, the Quail Brush Generation Project is a 100-megawatt natural gas power plant under long-term contract with SDG&E. The power plant is designed to support renewable resources and deliver power only when needed.

It would “smooth out dips when the sun doesn’t shine or the wind doesn’t blow,” said Lori Ziebart, project manager for Cogentrix Energy.

SDG&E also seeks the project to compensate for other power sources coming off-line, such as the decomissioning of a South Bay power plant.

According to the project website, since the proposed power plant is designed to operate only at certain times, the contract with SDG&E allows the plant to operate about 3,800 hours a year, approximately 43 percent of it’s actual capacity.

In an article in the La Mesa-Mount Helix Patch, a group opposed to the project, Stop the Santee Power Plant, is demanding that the CEC evaluate the project as if it were running at 100 percent capacity, since they believe the plant will run more often than not.

The CEC website states that the proposed power plant would be located west of Santee, near the Sycamore Landfill and Route 52. The site will be developed on approximately 11 acres of land privately owned by Development Land Holdings, a Cogentrix Energy, LLC subsidiary. In addition to the plant itself, other project components such as a utility switchyard and natural gas pipeline lateral will also be built.

Some Santee residents are concerned that the location of the proposed power plant isn’t far enough away from the community.

“I know we need power, but we don’t need a plant here, so close to homes and schools,” said Pat Janowski in a March 12 interview with the La Mesa-Mount Helix Patch. “Put it in an industrial area somewhere, not here.”

Residents have voiced concerns over property values, noise, view impacts, fire safety, and emissions from 100-foot-tall stacks.  The site is near homes and within 3/4 mile from West Hills High School.

"There is no smell," Ziebart stated, adding that state regulations for emissions have tightened from when earlier gas-powered plants were built.

According to Ziebart, the facility will be tucked in a canyon near an existing landfill, visible from portions of Mission Trails. She said the increase in background noise levels would be negligible and that "freweay noise would be substantially louder" from Highway 52.

The site will use 1.61 acre-feet of water a year in a closed loop system, with water stored onsite for fire suppression.

Opponents' website includes a link to a University of California, Berkeley study, done in the 1990s, which found a 3 to 7% decrease in property values for homes located within two miles of a power plant.

Some have also voiced fears that the facility could be expanded in the future. But Ziebart said the site would make future expansion impossible.

Cogentrix has agreed to purchase approximately 40 acres of land for the city to add to Mission Trails Regional Park as part of mitigation for the project.

The Quail Brush Generation Project is currently going through the siting process administered by the CEC, and Thursday’s workshop is a part of the mandatory proceedings.

In a press release issued by the CEC, the purpose of the workshop is to further discuss the Quail Brush Generation Project and to establish conversation between those involved or concerned with the project. CEC staff will explain the project’s certification process and will also give an overview its environmental aspects.

The workshop is at 5:00 p.m.  at the Mission Trails Visitor Center at One Father Junipero Serra Trail in San Diego. Those who are can’t attend the workshop can participate through the telephone or computer by following the directions listed in this link.