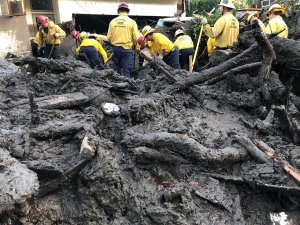 January 29, 2018 (Santa Barbara) -- Insurance Commissioner Dave Jones today issued a formal notice to all property and casualty insurance companies reminding them of their duty to cover damages from the recent mudslide and debris flows if it is determined that the ravaging of hillsides and vegetation by the Thomas and other fires was the efficient proximate cause of the mudslides. In general homeowners' insurance policies, excludes flood, mudslide, debris flow and other similar events.

However, Jones put insurers on notice that both the Insurance Code and case law have established the legal doctrine of "efficient proximate cause" which means if the facts show the Thomas Fire, a covered peril, was the efficient proximate cause of the subsequent mudflow, mudslides, debris flow, landslide, or other similar event, then damage caused by those events should be covered under the property owner's insurance policy.

"Californians have suffered greatly with all of the devastating losses from wildfires that struck the state in the last three months of 2017," said Commissioner Jones. "Preliminary indications are that the Thomas Fire burned vegetation which would otherwise have absorbed rainfall and held soils in place, which in turn resulted in the mudflows, mudslides, debris flows or landslides. If the evidence shows the Thomas Fire or another peril covered by a homeowner's insurance policy was the efficient proximate cause of mudflow damage, I expect insurance companies to step up and cover these financial losses."

Insurance Commissioner Jones is encouraging residents and business owners in Santa Barbara County affected by the mudslides, to file a claim with their insurance company. If consumers have issues navigating the claims process, or they think their claim was wrongfully denied they should contact the Department of Insurance at 800-927-4357 or online at www.insurance.ca.gov for assistance.