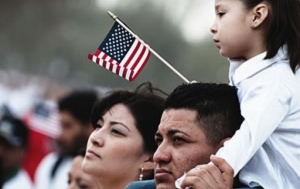 Chris Jennewein, editor at Times of San Diego, observes, “ The language of the resolution is gracious and magnanimous, in marked contrast to the anti-immigrant, anti-Hispanic venom on talk radio, in Internet chat rooms and even sometimes in the halls of the nation’s capitol.”

The resolution cites reasons showing why the Senators believe undocumented immigrants deserve an opportunity to become citizens. Those reasons include:

The resolution was passed while Republicans in Congress are threatening to shut down Homeland Security and refuse to fund the agency unless President Obama’s immigrant reforms are repealed.

California’s resolution was authored by  Republican Senator Andy Vidak from California’s Central Valley, who says the message to Congressional members is clear: “that the time is now to work together to address an issue that’s been ignored for more than 25 years.”

California has the most undocumented immigrants of any state in the nation, but legislators in both parties have come to a recognition that deporting 11 million people is both unrealistic and inhumane to families that would be torn apart. Instead, California’s Republican and Democratic Senators agree that offering an opportunity to earn citizenship is a more fair and viable option.

One correction to the quote in this bill. I suggest: This country was built by LEGAL immigrants seeking a better life. The only thing wrong with our immigration laws is they are NOT being enforced. Now there are so many of them in California even the Republicans are pandering to them. Why our "leaders" want to turn California into a third world country like Mexico is beyond reason.