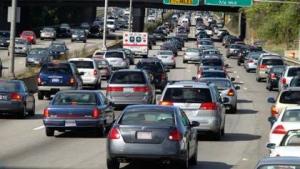 March 13, 2015 (San Francisco)--The California Supreme Court has granted partial review of a closely-watched environmental case that could have broad implications for transportation planning throughout the state.

Both the superior and appellate courts agreed that the San Diego-area planning agency failed to fully assess and mitigate against the climate risks associated with its plan, which invests heavily in freeways and subsidizes sprawl at the expense of public transit.

The Supreme Court agreed to review only one narrow issue within the case. It will consider whether the environmental review of regional transportation plans must include an analysis of the plan’s consistency with statewide goals for greenhouse gas emission reductions embodied in a gubernatorial executive order that set specific targets for reducing greenhouse gas emisisons by 2050.

Environmentalists argued that SANDAG’s plan would dramatically increase greenhouse gas emissions by building more freeways before mass transit—just the opposite of the state’s intentions.

“We are pleased that the Supreme Court let stand the vast majority of the Court of Appeal’s decision,” said Rachel Hooper, managing partner of Shute, Mihaly & Weinberger, LLP, who represents Cleveland National Forest Foundation and Sierra Club in the case.

There were several important issues in the case that were resolved by the Court of Appeal and were not taken up by the California Supreme Court.

As a result, under the Court of Appeal’s holding, SANDAG will be required to: develop more robust mitigation for the climate impacts associated with its plan; complete a more rigorous analysis of the air quality/ public health, and agricultural impacts of its plan; and develop a full range of alternatives to its proposed plan, including options that would reduce driving in the region.

This is the first case in which the California Supreme Court will consider the implications of SB 375, a state law aimed at reducing greenhouse gas emissions through improved regional transportation planning.

SANDAG was the first regional government in the state to develop a Sustainable Communities Strategy/Regional Transportation Plan under SB 375. Cleveland National Forest Foundation, Sierra Club, the Center for Biological Diversity, and two community groups all sued SANDAG over its approach, noting that, under the agency’s plan, regional greenhouse gas emissions would increase dramatically by the year 2050.

The agency had argued that the plan would reduce emissions in the short-term, but it did not acknowledge that the plan’s long-term increase in emissions was inconsistent with state climate policy. State Attorney General Kamala Harris intervened in the case in support of the petitioners.

“This case has important ramifications for whether or not California will ultimately achieve its greenhouse gas emissions reduction goals,” added Rachel Hooper. “We are hopeful that the court will agree that regional transportation agencies must assess their plans’ conformity to state climate policy. Without such requirements, it will be difficult for California to reduce its long-term contributions to climate change.”

Jack Shu, president of the Cleveland National Forest Foundation, had this to say. ““This week the California Supreme Court affirmed the Appellate Court's findings that SANDAG misinformed and misled the public and public officials in the their 2050 Regional Transportation Plan.   Will our elected officials now make significant changes to how we approach transportation in our region?  Will they make changes which will not just address people and goods move from place to place, but provide the maximum benefits to our public health, quality of life in communities, regional economy, agricultural lands, open space and overall environment?”