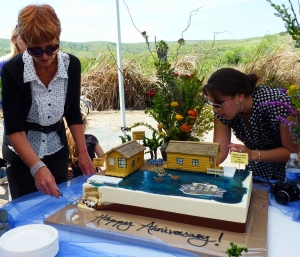 Invited guests savored a cake baked to resemble the lake itself, complete with cabins and waterfowl.  The occasion also commemorates the 50th anniversary of Santee Lakes. 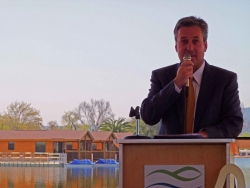 Allen Carlisle, director of parks and recreation, said that Santee Lakes “showcases the promise of water reuse” and noted the importance of that in an era when our region competes against seven states and other regions in California for water, “and we are at the end of the line.”

He noted that in 1994, 94% of San Diego County’s water was imported—a situation that placed the economy in jeopardy when water shortages and court-mandated restrictions in pumping the San Joaquin Delta occurred. “We said never again,” he recalled, adding that today, only 48% of our region’s water is imported—a figure that is forecast to drop to 23% by2020 thanks to new projects, water conservation and reclamation projects. The District currently recycles a million gallons of water every year, a figure that should increase once water projects in El Monte and Santee are completed. 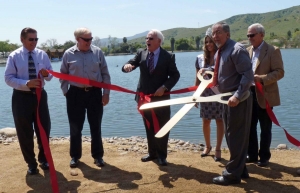 Mayor Voepel praised the many people who worked to bring the floating cabins dream to reality, calling it a “job well done.”

Carlisle injected a note of humor, quipping that the floating cabins have been named “Titanic, Lusitania and Valdez.”  (In fact, the cabins are safely docked--and fully stocked for comfort.)

Each cabin comes complete with flat-screen TV, wi-fi, fully equipped kitchen, bedroom plus bunk beds for the kids, bath, balcony, BBQ and fire pit—plus access to a pedal boat for exploring the lake, a model of sustainability and a pioneering project showcasing recreational uses for reclaimed water that now attracts visitors from around the world. 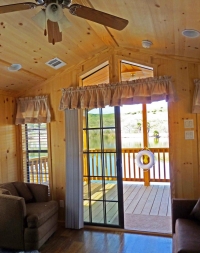 The park is not subsidized by ratepayers, but instead is supported entirely by user fees and donations, including funds raised by a brand new Santee Lakes Foundation, a 501c3 nonprofit organization.  Coming soon, a sensory garden for the sight-impaired will be opening, thanks to donations from the Lions Club.

At the ribbon cutting last week, the cozy cabins were open for guests to tour. If you want a glimpse inside, you’d better book your reservations soon. Rates run $100-$140 a night.  Opened April 1, the cabins are already booked solid for the first month—and many weekends through the summer months for tourists as well as local residents seeking a stay-cation here in East County. 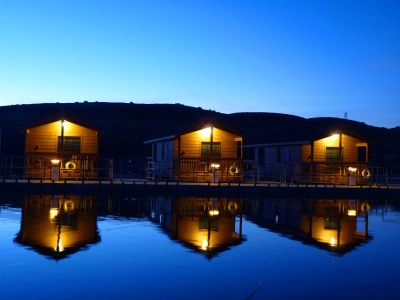