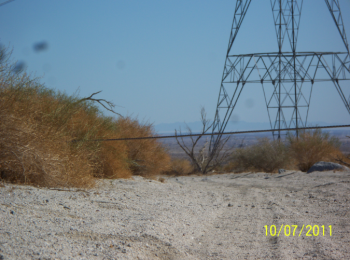 October 9, 2011 (Ocotillo) – ECM has received photos and an e-mail from Jim Pelley, a motorcyclist who reports finding metal cables strung two feet off the ground across roadways in Ocotillo frequented by off-road vehicle enthusiasts.

The cables were attached to an SDG&E helicopter “pulling cables from tower to tower,” Pelley reports.”This is a serious situation and I am worried that someone will not see this cable and a serious accident will result with either the off road vehicle or the helicopter.” 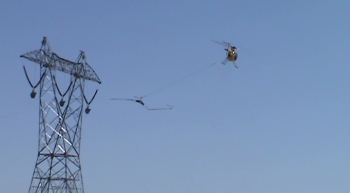 All helicopter operations on Sunrise Powerlink had been ordered grounded for several days due to serious safety violations, including dropping two tower sections and other equipment, failing to report tail rotor problems and pilot error that resulted in striking a boulder and a fence, and other problems. 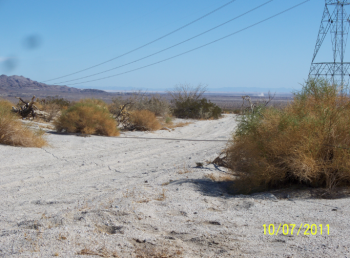 Powerlink helicopters have been previously grounded for the tower drop, then allowed to resume flights before the more recent stop work order.  The company has also faced regulatory actions for violating no-fly areas around golden eagle nests. In addition, numerous residents have complained to the FAA of alleged flights too close to homes and even carrying suspended loads above residences—actions that if true, would be illegal.

Pelley said that he was traveling west to east down a Bureau of Land Management Road on October 7, when “to my surprise, I came across a cable draped across the BLM road with no one around, no cones no workers to stop me from running into the cable.” 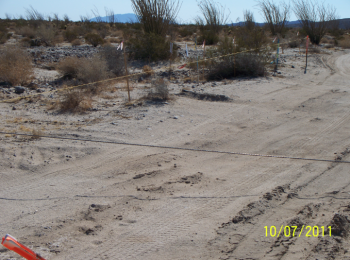 Striking a taut cable two feet above the roadway could cause harm to an unsuspecting motorcyclist or off-road enthusiastic. But the first cable found by Pelley wasn’t the only problem.

“I went down a second BLM road and again a cable was running across the road with no cones, no signs no workers to stop me from hitting the cable and it was pretty hard to see,” he wrote in an e-mail sent to ECM, along with photos to document his complaint. “I ride my motorcycle down these roads all the time and I could only image what would happen if I hit this cable.” 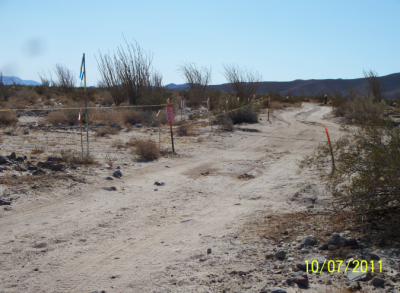 Moreover, he notes, the activity could put a pilot’s safety at risk. “I’m sure if I hit this cable unexpectedly it would probably cause a problem with the helicopter pulling the cable.” He added that with cooler weather this weekend, the area is busy with numerous off-road vehicle enthusiasts. Pelley said a Powerlink worker told him crews will be pulling cables all weekend.

“Why is it okay to not have cones or workers watching for traffic at all roads including BLM dirt roads?” asked Pelley, an Ocotillo resident who called the hazard “a very serious situation.” 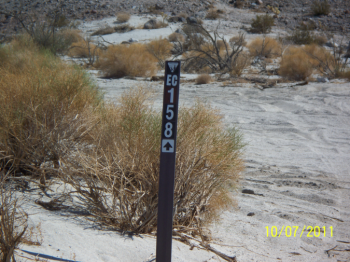 Pelley, a freelance photographer, has been named among ECM’s winners in the San Diego Press Club’s journalism competition for video he shot documenting a 16,000 tower dropped by an SDG&E helicopter in June. That video was taken over objections of an SDG&E worker who asked Pelley to stop taking pictures even though he was in a public roadway: http://www.eastcountymagazine.org/node/6418 .

ECM has forwarded copies of the photos and Pelley’s correspondence to SDG&E as well as to the Federal Aviation Administration (FAA) and the California Public Utilities Commission (CPUC) as well as to Supervisor Dianne Jacob for comment.

The PUC meetings are happening tonight, tomorrow & Thurs. see schedule below. Tell them directly what you've seen, heard, and are concerned about.