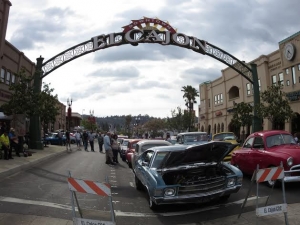 April 26, 2015 (El Cajon)--The grand opening  of Cajon Classic Cruises last Wednesday night appeared to be a rousing success. Everywhere I looked there were crowds of people checking out old cars. Most were fully restored in various manners, yet a few were ‘as is’ and still needing much work. Perhaps the owners had not gotten around to that yet, or maybe the ‘rat’ look was by design. 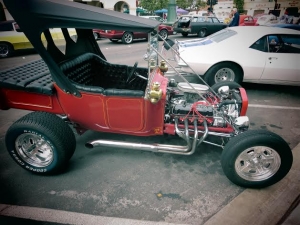 These beautiful vehicles lined Main Street for blocks. From Buicks to VW’s there were cars which were sure to entice any automobile enthusiast. Most had custom paint themes, yet a few still retained their classic period look. I had no particular favorite, they all had their merits.

On Sulzfeld Ave. there was a very nice display of custom Harley Davidson motorcycles as well. Memories abound as I recall the days of yore… 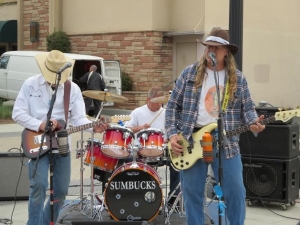 At 5:00 the National Anthem was played on a PA system at Prescott Park, everyone stood at attention with their right hand over the heart while facing the large United States flag which is proudly suspended there 24 hours a day, seven days a week. Mere seconds after folks showed their respect for our nation’s flag, a vintage war plane performed a flyover straight down Main St. This aircraft was flown by a member from Air Group One which is based out of Gillespie field in El Cajon. Thank you AG1, that was awesome! 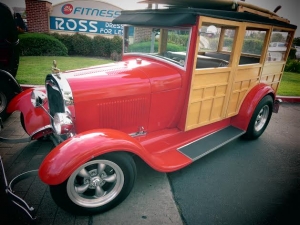 I could smell the delicious aroma of cooking food at several locations which made me hungry. Speaking of good food and libations. The downtown restaurants were jammed with gregarious folks having a good time! Urbn St. Brewing Co., Por Favor, Downtown Café, and New York Bakery, just to name a few, seemed to be at full capacity. Ah, life is good!

At Prescott Park there was a live band playing - The Sumbucks - and as an avid music enthusiast I can unequivocally say, “these guys were rockin’ the place“! Their style is Rock with a Country flavor added in. Hometown: Valley Center, Ca. Thanks guys - keep on rockin’!

Check ‘em out at https://www.facebook.com/sumbucks2

The only disappointing issue I frequently encountered was rude smokers who were blissfully ‘sharing’ their tobacco habit with everyone around them, adults and children alike.

Of course lack of signs indicating ‘No Smoking’ is obvious, as are lack of ‘smokers outposts.’  I fail to understand how the city of El Cajon can tout itself to be a ‘smoke free city’ when in fact it is not! Lack of enforcement is glaringly obvious, even on a normal day. It sure would be nice if smokers would be considerate of non-smokers and choose an out of the way area to indulge in their habit.

All in all though, I had a really good time and plan to attend more of these Wednesday night cruises. Check the forthcoming schedule at: www.cajonclassiccruise.org

or maybe they were looking for an "angel" -- it must cost a small fortune to bring those cars up to spec.