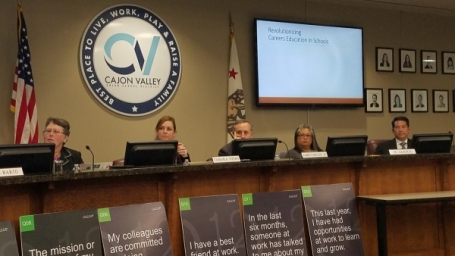 February 20, 2019 (El Cajon) -- Some local government agencies, including many school districts, pride themselves on their transparency and openness towards local citizens. Others, such as the Cajon Valley Union School District (CVUSD), would rather operate under a cloak of darkness.

Despite a legally submitted California Public Records Act (CPRA) request made by ECM for a copy of the recording for the Dec. 11, 2018 CVUSD board meeting, the district willfully destroyed the recording without fulfilling our request. 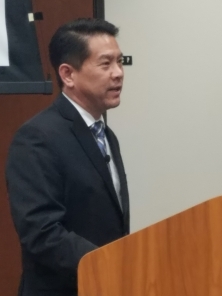 ECM submitted the request just one day after the meeting.  It was emailed to the district Superintendent’s Executive Assistant, Naomi Rodrigues and was also sent to Superintendent David Miyashiro, Ed.D. (photo, right), and Board President Tamara Otero.

The district’s policy is to retain recordings for only 30 days, the minimum required under state law. State law requires CPRA requests to be fulfilled within 10 days unless there are extenuating circumstances. The district informed ECM that due to the Christmas and New Year’s holiday, it could not comply until Jan. 25, 2019. Instead, it destroyed the recording.

ECM had also requested several earlier meeting recordings, which had already been destroyed.

In addition, Board member Jill Barto informed ECM that she had requested a copy of the November meeting in a timely manner, but that it, too, was destroyed. Barto says the district refused to provide a copy, refused to allow her to make her own copy or to even take notes, but told her she could merely listen to the recording in the district office. However, Barto says repeated attempts to schedule such a session were unsuccessful.

ECM requested the Dec. 11 school board meeting for the purposes of listening to a comment made during the public participation portion of the meeting by El Cajon resident and CVUSD parent Mark Robak. He had voiced concern about a critical report released on Dec. 7 by the California State Department of Education, revealing poor educational performance of numerous district schools.

While CVUSD regularly promotes that it is in the top 73 US school districts for "innovation and digital learning" as well as other accolades, the district made the State of California Department of Education's list for being one of 374 districts flagged as needing additional support to improve their performance. CVUSD along with several other San Diego County School Districts have been red flagged as having difficulties that have raised the attention of the state for the second year in a row.

While half of the county’s school districts were flagged for performing poorly in at least two areas, the CVUSD received an overall district-wide “D” grade by the State of California. It received a “D” in chronic absenteeism, suspension rates, English, and mathematics. (ECM will be reporting on the specifics of the State Department of Education Classroom in the coming week.)

Strictly, the California Public Records Act (also known as the “Brown Act” does state that public meeting audio may be erased or destroyed 30 days after the recording. It also says that any inspection of an audio or video recording shall be provided without charge on equipment made available by the local agency or the agency and that citizens may ask for a copy of the recording for the cost of duplication.

In subsequent e-mail communication with ECM, Rodrigues said, “Once again as I stated previously, the recording will be played on a district device.”

A survey conducted by ECM of other local San Diego County school districts and government bodies finds that citizen access to archived recordings, agendas and board minutes of public meetings varies. Most districts, such as the County Board of Supervisors, archive them in perpetuity and make the easily available online.

This journalist addressed the CVUSD school board at its Feb. 11 meeting, advising that ECM will consult with attorneys regarding potential action against the district, then concluded, “Little over a century ago, Supreme Court Justice Louis D. Brandeis famously wrote, `Publicity is justly commended as a remedy for social and industrial diseases. Sunlight is said to be the best of disinfectants.’ East County Magazine intends to follow the words of this great man fairly, diligently, and honestly.

During the Feb. 12 meeting of the CVUSD, Rodrigues declared during a board discussion that the recordings made of the board where not intended to be reviewed by the public, but were being made to verify the written board minutes for future circulation.

Terry Francke, general counsel for Californians Aware (CalAware) told ECM that the district’s actions violate state law, both by destroying records requested within the 30-day window and by allegedly refusing to allow Barto to access the recording and make her own copy. He cited the Brown Act, California’s open government law, which explicitly states that it does not authorize a district to “forbid a requester from recording the district’s copy on his or her own equipment while inspecting it.” 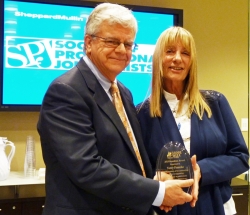 Photo,left: Terry Francke and Donna Frye received "Sunshine Award" from Society of Professional Journalist (SPJ) in San Diego for their efforts  on behalf of open government

“It is my impression that they knew in advance what you had asked for prior to the time with the 30-day time running. Rather deliberately, they ignored a very simple request for information that the public has the right to have,” Frye says.

“I’m not an attorney and won’t comment on its legality, but if they are running schools, they need to go back to schools themselves.”

Frye adds that elected officials need to understand who they work for. “Whether you are working for a public school, county, or city, the thing that any elected or appointed official needs to remember that they work for the public. It’s not a very difficult concept.”

Often, public leaders forget who their bosses are, and view the public as “an inconvenience,” Frye notes. “It is a very difficult attitude for me to understand or comprehend.”

She adds pointedly, “When you are put into that level of authority and certainly have power, you also have responsibility, and that responsibility is to serve the people who put you there--not to withhold that information. Not to treat them badly. Not to destroy documents.”

Frye makes clear, “It is their responsibility to make access to public records easier, not more difficult.”

CVUSD does not make recordings accessible past thirty days after the meeting date and requires citizens make an appointment with Rodrigues.

Unlike in the 1950s when the Brown Act was passed with the 30-day minimum retention requirement for meeting recordings, at time when large reel-to-reel tapes posed bulky storage challenges, technology has made electronic storage of audio files today  an easy and inexpensive process. There appears to be no legitimate reason why the CUVSD or any public district should not make audio files accessible to the public on its website indefinitely, as is already done with meeting minutes.

ECM will make recordings of CVUSD board meetings that it attends available free to the public at www.EastCountyMagazine.org for the foreseeable future.

Below are links to audios from the January and February CVUSD board meetings.

There is no doubt that lowering the voting age in California, as well as allowing "illegals" to vote; reflect on their ignorance about America, the Constitution, Bill of Rights, rule of law and why our State Legislature and Governor are so wacked out. It reflects right back to the bad educational system and net results of these illiterate adults and adults to be, that now take their place at the polls. It smacks right back at those area educators and leadership that is responsible for this mess.
Yes, these folks do seem to forget that they do indeed "work for the public". Additionally, the public pays their salaries (and school buildings, etc.) with taxes. Obviously there's some shady business going on here. Going to be very interesting to see the outcome of diligent investigating, and who could lose their coveted jobs.