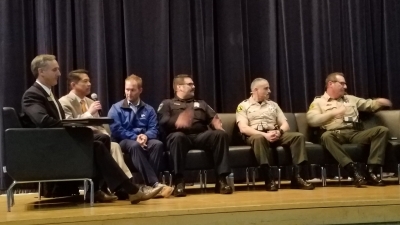 March 11, 2019 (El Cajon)--Following a safety and security audit recently conducted by AECOM and DMB Consultants, two security engineering firms specializing in building security audits, the Cajon Valley Union School District (CVUSD) has been conducting a series of town meetings at local schools over the past month. The meetings are being held throughout the district to advise parents on what the district is doing to improve student safety and building security. 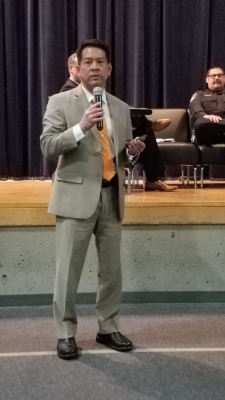 According to Love, the safety and security audits conducted by the two firms came about after four serious safety incidents.

While Love said that the incidents had no connection with each other, “they all share the common theme of threats to safety in general and physical harm to others, specifically.”

Recommendations made by the security consultants include establishing a uniform emergency response to incidents and installation of locking devices. Also, in the near future, a toll-free dedicated CVUSD safety and security tip phone line will be established.

Although he has since been replaced by the San Diego County Sheriff’s office due to an ongoing federal investigation, then-Captain Marco Garmo told the small crowd of parents that during an active school incident, “The last thing in our minds are parents.”

He encouraged parents to “be patient.” The first priority during a situation is to make sure that all of the students are safe and to deal with the cause of the emergency situation.

Garmo also encouraged parents to “understand what is in your child’s backpack. But also understand which is on their social media,” he said. “We need your help on this.” He also urged parents to not only be vigilant about their children’s use of social media, but also urged them to use it responsibly and “don’t create havoc” with inaccurate posts.

Lisa Mafey, a Hillsdale Middle School parent, was quick to praise the participants of the town hall meeting and the scope of the material presented. However, she expressed concern that the school district is not going far enough by training school personnel to deal with emergency incidents. “Nobody said a word about training students on what to do during an emergency,” she said.

Editor’s note: East County Magazine (ECM) made a California Public Records Act request on Feb. 18 to the CVUSD administration for the presentation slides used at the school safety and security presentations. Unfortunately, ECM was given a document with blurry images. Attempts to gain access to a readable document were ignored. ECM is consulting with its attorneys regarding its thwarted request for documents related to this article.

This would make anyone suspicious. Should be interesting to find out what their attempting to cover up (if anything - yes I'll allow reasonable doubt, for now) and why. A couple suggestions regarding school safety: Bring back crossing guards at the elementary schools, direct El Cajon police to enforce speed limits in school zones (signs do not work).