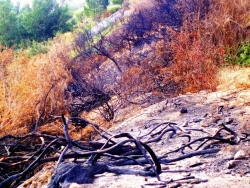 September 21, 2011 (Boulevard) -- –Cal Fire resources will be conducting a small prescribed burn in the area of Mc Cain Conservation Camp north east of the Community of Boulevard. This burn is scheduled to take place in the early evening hours of September 22, 2011 between 6 p.m. and 10 p.m.

Cal Fire plans to burn approximately 10 acres of non-native grass in preparation for a larger Vegetation Management Burn planned for later in the fall.

This burn is being conducted in the evening to take advantage of the cooler temperatures and higher humidity’s to allow for a low intensity burn under the mature live oak trees without causing damage to the trees.