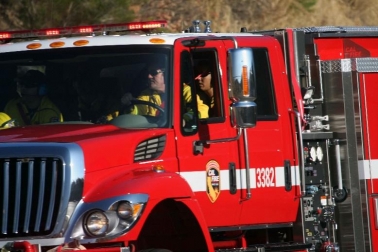 “Cal Fire/San Diego County Fire is holding all of our nearly 500 firefighters on duty to staff equipment and fill our support roles,” says Captain Issac Sanchez, public information officer.  “This will ensure we have the depth in resources to account for the fire potential, while still supporting ongoing incidents throughout the state.”

According to Sanchez, Cal Fire has brought in 150 out-of-state fire engines to California. These resources are intended to provide relief for those on the Kincade Fire in Sonoma County, and will allow CAL FIRE to continue managing the incident without over-committing our initial attack forces, he says.
“In San Diego County, we have staffed 15 additional fire engines, five patrols, six water tenders, plus various elements including our mobile kitchen and communications unit,” Sanchez states in a media release.
He adds, “Our Regional Coordination Center in Riverside has been closely tracking the weather and has limited the number of resources sent out of Southern California.  CAL FIRE Riverside and CAL FIRE San Bernardino are also fully staffed.”