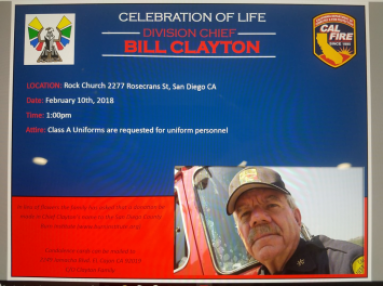 Services to honor legendary firefighter are set for February 10th

The most honored member of California’s state firefighting agency now known as Cal Fire, the division chief passed away in his sleep on Sunday, February 4th, of natural causes.

Clayton received the most awards of any firefighter in Cal Fire history, including twice earning the Medal of Valor, the state’s highest award for bravery.

The first award in 1998 honored Clayton for driving through 50-foot-high flames to save a teenage boy, his mother and grandfather in 1997, shortly before a fire destroyed their home in Lake Wohlford.

The second Medal of Valor in 2006 honored his life-saving efforts during the October 2003 Paradise fire. After driving through flames, comforting relatives of people trapped and burned in their vehicles, and stopping at the scene of a teen girl severely burned, he pushed on to Valley View Casino.

The book The Fire Outside My Window recounts the ordeal as Clayton arrived at the staging area.  “…with the Cedar Fire sucking up every engine left in the county, plus reinforcements en route from outside the region, Bill Clayton’s urgent order for reinforcement of troops and equipment fell flat. Headquarters had nothing left to send him.”

At the casino,flames threatened to penetrate the rear of the building near a massive propane tank.  Clayton had ordered fire engines to the casino and coordinated their efforts to battle the inferno and save as many nearby homes as possible.  He feared the fire could breach the roof, but knew that if people tried to flee through the fire outside, their chances were even more grim.

Inside, he found a chaotic scene, with some 200 people trapped inside and a horse running loose that had kicked a man.  Clayton reportedly jumped in front of the flailing animal, waving his arms and shouting as a security guard managed to grab the halter and restrain the horse.  Clayton then jumped onto a chair in the room that smelled of smoke and urged the crowd to stay calm.  “Stay right here. If you do, you’ll live,” he promised. If you leave and try to drive out of the fire, your chance of survival will be slim.”  Everyone stayed, and all survived as Clayton managed to recruit air tankers and the building was saved.

In the Cedar Fire, CNN had reported on national TV that the town of Julian appeared doomed in what was then the worst wildfire in California with a ten-mile-wide wall of flames advancing toward Julian. Overall, the fire had a 45-mile-long front.  The entire town had been evacuated,, CBS reported, with flames towering 100 feet high.  U.S. Forest Service Fire Chief Rich Hawkins said at the time he needed twice as many reinforcements as had arrived, despite help from neighboring states and the federal government.

But once again, Chief Clayton somehow managed to pull off the seemingly impossible, and the town of Julian was saved.

He also was at the scene where a Northern California firefighter, Steven Rucker, died protecting a Wynola home during the Cedar Fire.  In a 2006 news interview, Rucker said he poured water from his canteen onto Rucker’s lifeless body because “I didn’t want his body to be desecrated any more.”

Despite contracting pneumonia during the Cedar Fire following smoke inhalation, after the 2003 firestorms, he accompanied President George W. Bush on a helicopter tour of the damage and was invited to tour Air Force One.

Clayton’s 50 year career in firefighting began with the U.S. Forest Service in the Cleveland National Forest. He later moved to the California Department of Forestry and Fire Protection, the state agency later known as Cal Fire.  He has also worked as Fire Chief at Sycuan, as Deputy Chief at the Orange County Fire Department, and Assistant Chief in the Rainbow Conservation Camp.

Later in life, Chief Clayton served as an expert consultant in the U.S. and internationally, pioneering emergency fire planning in Southern California and emergency management in Australia, Portugal and Iraq.

“He was a legend in the fire service,” retired Cal fire Battalion Chief Ray Chaney said of his long-time friend, the Union-Tribune reported. Chief Chaney added while responding to a “giant atomic bomb-looking column of smoke,” he took comfort hearing Clayton’s voice on the radio because “you knew you had a man of his caliber that was going to be there to support you no matter what circumstance you were going to be involved with.”

Chief Clayton is survived by his wife, Ila, son Chris, daughter Ann, step-daughter Stacey, and eight grandchildren. In lieu of flowers, the family asks that donations be made to the San Diego County Burn Institute (www.burninstitute.org. )  Condolence cards or letters may be sent to 2249 Jamacha Blvd., El Cajon, CA 92019 c/o the Clayton family.

A memorial service is scheduled for February 10th at 1 p.m. at the Rock Church, 2777 Rosecrans Street in San Diego. Uniform personnel are requested to wear Class A Uniforms to honor a firefighting hero who saved countless lives and leaves behind a lasting legacy of improved fire management and public safety in our region and others across the globe.

Many friends were affected by the Cedar fire, some lost their homes. A friend of my son lost their home and a classic hot rod car, I have a three foot long piece of aluminum from the melted pistons.