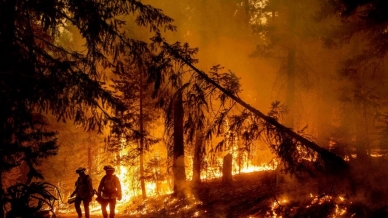 Photo: CC by NC-ND via Bing

January 6, 2022 (Butte County) – Cal Fire investigators have determined that the Dixie Fire, which burned nearly a million acres and destroyed 1,329 structures in northern California, was caused by a tree contacting electrical distribution lines owned by Pacific Gas and Electric (PG&E). The blaze was the second largest in the state’s history and also caused at least one death.

Cal Fire announced that it has forwarded its findings to the Butte County District Attorney’s office for possible criminal prosecution.

PG&E pleaded guilty in 2019 to 84 counts of involuntary manslaughter in the 2018 Camp Fire, the state’s deadliest wildfire, admitting its electrical grid caused the fire. The utility also faces civil and criminal actions from other blazes.

Cal Fire’s findings blaming PG&E equipment for yet another blaze came after a “meticulous and thorough investigation,” according to Cal Fire.

In a statement, PG&E said, “This tree was one of more than 8 million trees within strike distance to PG&E lines.”  The utility added that regardless of Cal Fire’s findings, “We will continue to be tenacious in our efforts to stop fire ignitions from our equipment and to ensure that everyone and everything is always safe.”

It remains to be seen whether the Butte County D.A. will file new criminal charges against PG&E.

Authorities also urged Californians to remain vigilant and be prepared for wildfire. For more information on how to be prepared, visit www.readyforwildfire.org or www.fire.ca.gov.