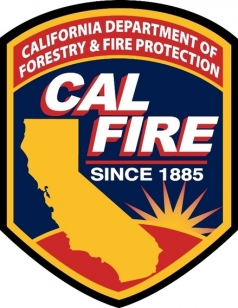 August 30, 2018 (Lakeside) -- On Monday, San Diego Unit CAL FIRE law enforcement officers arrested Daniel Reyes Ortega, 21, a transient in Lakeside. Ortega was booked on charges of willfully and maliciously setting fire to forest land. The arrest and was made with cooperation of the San Diego Sheriff’s Department.

Ortega is accused of setting a half-acre fire along the 11000 block of Highway 67 in the unincorporated community of Lakeside on Monday, August 27th. Ortega was transported and booked into the San Diego Central Jail on a $75,000 bail.

Units from Heartland Fire and CAL FIRE San Diego responded to the fire just after 12:00 PM and suppressed the fire quickly. There were no reported injuries or damage to property.

CAL FIRE San Diego reminds the public that if you suspect arson is the cause of a fire in your area or witness any suspicious activity related to a fire, don’t remain quiet. Call the Arson Hotline and report it immediately at 800-468-4408.

I know this is from a Calfire media release; however, the response to this incident did not include any "Heartland Fire" units. Obviously, Lakeside Fire was the initial agency that responded and got on scene (Engine 2 was on scene in 8 minutes). Other assisting agencies on the initial alarm were: Santee Fire and Barona Fire (Heartland Fire Rescue routinely assists on fires in Lakeside, just not this one). The assisting agencies are from the San Diego County Central Fire Zone; this zone was formerly known as the "Heartland" zone, but the name changed due to the advent of Heartland Fire & Rescue several years back. It is true that SD Central Zone agencies are collectively dispatched by the Heartland Communications Facility Authority which is perhaps the source of Calfire's confusion. The reason Calfire resources are assigned to these incidents is that the location is within the State Responsibility Area or "SRA." Many of you may remember the ever-popular "SRA Fee" which was assessed of homeowners living in the SRA, despite also being protected by a fire protection district (as was the case for many Lakeside residents). It is instructive to remember that NONE of the generated revenues went to any fire protection district; only to Calfire! https://www.google.com/maps/d/viewer?mid=1gulJwIgOMh2a5LGwQR6uXvEbL-s&ll=32.80335838215376%2C-116.86507255000004&z=11