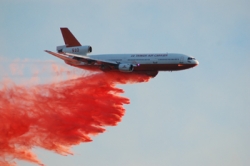 June 9, 2011 (San Diego's East County) – One of the nation’s only DC-10 very large Airtankers has been deployed from California to assist in fighting the raging wildland fire in Arizona. The request was made yesterday by the U.S. Forest Service. The aircraft, Tanker 911, took off this morning from its base in Victorville.

The Forest Service is accessing the DC-10 through a call-when-needed contract that Cal-Fire has with 10 Tanker, the company that operates the only two DC-10 very large airtankers in the world. During peak fire season, CAL FIRE has an exclusive use contract with 10 Tanker to enhance its aerial firefighting fleet. The DC-10 aerial firefighting aircraft made its fire fighting debut in 2006 on the Sawtooth fire in San Bernardino County.

The DC-10’s operate with a flight crew of three, a pilot, co-pilot and a flight engineer. The tanker works with a lead plane and can be an effective tool in combating wildfires when working directly with ground resources. The DC-10 firefighting aircraft are fitted with three external tanks that are mounted along the centerline of the plane. Together, the tanks hold 50 tons of water or retardant. The tanker can drop as much as 12,000 U.S. gallons of retardant in as little as eight seconds through its computerized gravity fed water dump system. It is used primarily to lay down long lines of retardant.

"California is no stranger to wildfires and Arizona was one of many states that sent assistance to help us during the devastating 2008 lightning fire siege," said Chief Ken Pimlott, CAL FIRE acting director. "We are grateful that our relationship with 10 Tanker enables us to assist our neighbors during their time of need."

Aerial firefighting resources are one of the many tools available to Incident Commanders to fight wildfires when and where the aircraft can be effective. For more information on the DC 10 and its relationship with CAL FIRE: http://www.fire.ca.gov/fire_protection/fire_protection_air_program_dc10.php

This DC-10 saved our little town in the "Post" fire. I shot some stills and submitted to the Canon Imagin8tion Photo Contest. The shot of this DC-10 is a semi finalist
in the Project Imagin8tion Photo Contest put on by Canon Cameras and Ron
Howard. You can help out by voting for my shot and getting this image into
the finals of this contest. The image could inspire Ron Howard in his next film!
Share this link with anyone who might like to vote for it. Voting goes till
9pm Pacific time June 23rd 2011.
http://www.youtube.com/imagination?x=us_hausswf_67963