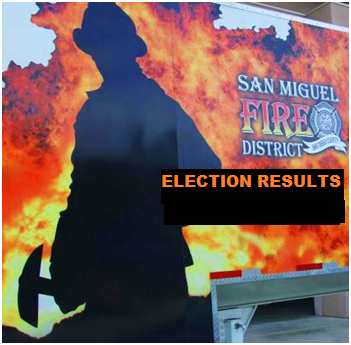 November 12, 2016 (San Diego’s East County) – In July, San Miguel’s Fire Board voted by a slim one-vote margin to cancel its contract with CAL FIRE a year early and go back to being a free-standing district, but kept the action on hold pending outcome of the election.

Now, three of the four winning candidates support continuing the deal with CAL FIRE, while only one wants to give CAL FIRE the boot. Yet ironically, the candidate with the most votes, retired Fire Chief Kim Raddatz, stands firmly on the side of axing the CAL FIRE contract.

There were two slates, each with four candidates, in the running.  Randy Dibb, the ninth candidate running, said he hadn’t made up his mind on whether to stay with CAL FIRE or not.

Voters, it seems, did not want wishy-washy stances.  But why not approve candidates all on the same side?

Some voters we spoke with said they split their votes among the two slates because despite heated discussions on the issue, were not yet convinced which would be best for the district’s residents and taxpayers.  Several indicated they hoped to see the new board fund an independent study rejected by the prior board to provide more confidence as to whether or not the district can afford to go back to being independent.

A prior board authorized outsourcing firefighting to CAL FIRE during the recession, when property tax revenues plummeted and the district got in over its head financially with spending on a training center facility that remains unfinished.  The district was forced to eliminate an engine at its Dehesa station and faced further potential cuts in services.

Now some contend the district’s finances have improved sufficiently to return to local control as a free-standing district. (Some pro-CAL FIRE candidates have disputed use of the term local control, saying CAL FIRE to date has complied with all major requests.)

Those favoring return to independent status have pointed out that CAL FIRE firefighters are working much longer hours, leading to fatigue that could put safety at risk.

When the new board takes office, it could vote to undo severing ties with CAL FIRE, at least until the original contract runs out next year, though the Cal Fire slate failed to win a majority.  To restore confidence of the public, one option would be to fund the independent study and carefully weigh its findings—however they turn out—before making a long-term decision on the future of the district when the contract comes up for renewal.

Below are the vote tallies with 100% of precincts counted, but some mail-in and provision ballots remaining.

Correction: Article updated to reflect that the board does not have a pro-Cal Fire majority, since the pro-Cal Fire slated needed to win all four seats to retake a majority.

Wow! The content of this article changed with no mention of an update (although it still incorrectly states ... "new board with its pro-CAL FIRE majority..."). Anyhoo, here is what was spent on the election according to the campaign finance statements: Calfire Local 2881 - $39,912 total or $9978 per candidate; Citizens of San Miguel to support Johnston... (former SMG FFs Recipient Committee) - $23, 789 total or $5947 per candidate. Bottom line: the 6000-member Calfire union spent 67% more than the 40-some odd member local folks.
Yes Calfire does have a large union. The firefighters who used to be with San Miguel all put in tons of money to try to get voters to vote for their candidates (while most don't live in area). They are pushing for stand alone because they want to be thw highest paid in county. Don't fool yourself. After 5 yrs, they lose their additional $. These guys all donated hundreds each to political rally!! Raddatz got #1 simply because his bio was "retired fire chief". They still have majority so it may go back to stand alone.
The "Recipient Committee" formed to back the pro-local control slate raised just under $30,000 from fewer than 50 individuals and other entities (or $600 per person average). While it is difficult to track down what the 6000-member Calfire union local spent (as it was an independent expenditure campaign from their statewide PAC), I can guarantee it was significantly more than $30,000. There is no question that the "retired firefighter" ballot designation is an almost virtual lock on being elected as these voters tend to do no research whatsoever and make the selection based on such designation (that is why Jeff Nelson came in 2nd!). Having known and worked with many of the former San Miguel firefighters, any suggestion that they want or expect to be "thw (sic) highest paid in the county" is sheer nonsense.
So, let me see if I have this right: McKenna, Vacio, Ek, and Johnston voted to terminate the contract; Raddatz, who is on the pro-local control side was elected, e.g., replaced Johnston. That still looks like four votes to me! The bottom line is that the largest firefighter union local in the state (L2281) needed all four of their candidates to win in order to secure a board majority (on a seven-member board, four is a majority!) Despite Local 2881's overwhelming campaign financing advantage, their "slate" actually lost the election on the issue that their candidates ran on.